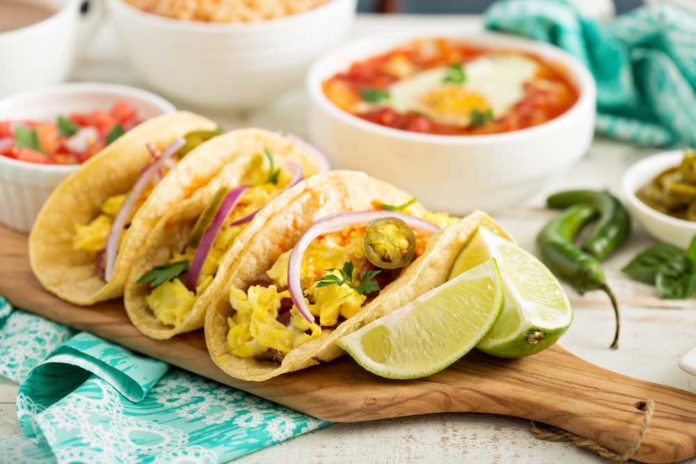 The cracking of eggs, the sizzling of bacon, and the brewing of coffee… These may be the anticipated smells and sounds to wake up to. However, the crunch of taco shells should not be discounted in the morning, as #TacoTuesday deserves recognition at all times of the day. Start and embrace the day with these best breakfast taco recipes!

Conform that traditional breakfast diner plate into one on-the-go taco! Start by sizzling two slices bacon and scrambling two eggs. Add cheddar cheese, and salt and pepper to taste then transport mixture to taco shell of choice. If feeling a little more adventurous, top with this healthier-for-you sausage gravy.

Start by preparing the potatoes much like a potato skin, as they will act as the “shell.” Prepare beef steak to desired doneness and scramble eggs. Add both steak slices and eggs to potato shells, sprinkle atop shredded cheddar cheese, and broil in oven until the cheese has melted and achieved a golden appearance. Top with a dollop of sour cream or plain Greek yogurt and green onion!

In a medium-heat skillet with a tablespoon of olive oil, sauté favorite farmers market-inspired veggies, including zucchini, onion, and peppers. When the veggies are soft, slowly mix in a couple of eggs until cooked. Add mixture into corn tortillas and sprinkle with goat cheese and ground black pepper.

Start the morning off with a fresh catch taco! Pan-fry unshelled shrimp with fresh garlic and a drizzle of olive oil. Once shrimp is cooked through, crack and scramble eggs and add to a soft flour or corn tortilla. Garnish with fresh pico de gallo, sliced avocado, a dollop of plain Greek yogurt, and a drizzle of hot sauce.

Huevos rancheros is a traditional Mexican staple, composed of fried eggs served upon corn tortillas and topped with a tomato-chili sauce. Find the breakfast taco recipe here and compliment with refried beans, Mexican-style rice, and avocado or guacamole as desired.

Lightly dust a whole grain tortilla with cinnamon and bake until lightly golden. In a medium-sized bowl, mix cubed peaches, plain Greek yogurt, cinnamon, and a drizzle of honey and add mixture to cinnamon tortilla. Feel free to alternate with fruits, including berries or bananas n’ cream!

In a non-stick skillet on medium heat, cook sliced bell peppers and onions for approximately three minutes. Add in ready-prepared quinoa or rice and scramble in one egg. Add to a soft tortilla shell and drizzle soy sauce and chopped scallions.

Whether following a vegan lifestyle or simply trying to reduce meat intake, allow tofu be the morning star in this healthy breakfast taco recipe! Since tofu can take on various flavors much like a sponge, feel free to adjust seasonings as desired. Find more meatless breakfast recipe ideas here.

All About Carb Cycling (& If It’s Right for You)