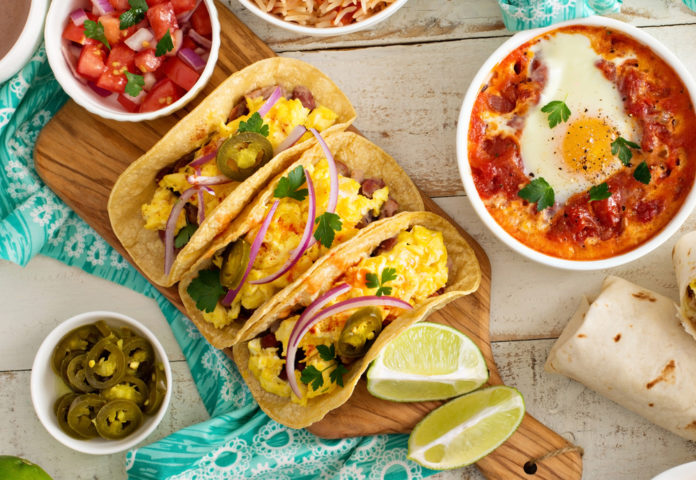 How to Make Delicious Breakfast Tacos

The taco shell simply acts as the foundation to harness all the chosen flavors. Purchase shells based on preference, including whole grain, corn, and flour tortillas which may also come in soft or hard variations. If the shell is soft, carefully charbroil until the tortilla has grill marks for added character and if feeling a little extra zealous, try making your own tortilla shells!

Along with protein, fiber helps increase satiety. Adding colorful veggies not only boosts fiber content, but transforms the breakfast taco into a nutrient powerhouse! Intensify the tacos with sautéed peppers and onions, tomatoes, spinach, potatoes and hash browns, or roasted squash.

The toppings do not stop with the veggies… Enhance the flavor by garnishing with shredded cheese, salsa, hot sauce, Greek yogurt, avocado, nuts and seeds, fruit, and fresh herbs, including parsley, cilantro, basil, and chives.

The breakfast taco variations can be endless! Feel free to tryout flavors based on personal preference. And on one weekend morning, create a build-your-own breakfast taco bar to experiment with different ingredients. Invite close friends, family, or neighbors to join in on the fiesta!

How to Make Potato and Egg Tacos