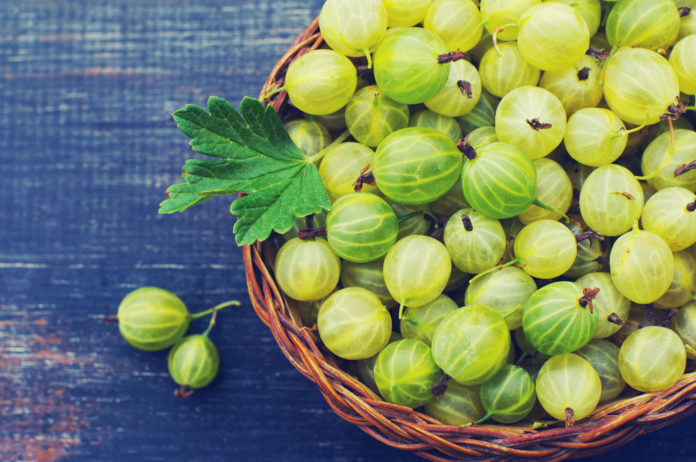 Strawberries, blackberries, blueberries, raspberries… All berries commonly consumed and encouraged related to their beneficial nutrient composition. However, gooseberries generate body-benefiting properties yet tend to go unnoticed while the other berries take the spotlight. Let gooseberries shine relative to their flavor, nutrition, and health benefits!

Gooseberries: What Are They?

Gooseberries mostly come from two species: the European gooseberry and the American gooseberry, each providing their own breeds of the fruit. But despite their origin, gooseberry plants are actually shrubs, growing bell-shaped flowers along with sharp spines and gooseberry fruits. Gooseberry fruits are mostly known for their green color, yet also witnessed in yellow, white, red, and purple varieties which depend on its origin and breed. Their size and appearance are also dependent on their species, as European gooseberries may be very large and relatively long and shorter in width; while American gooseberries are much smaller and perfectly round (resembling a grape). Their ripe flavor is said to resemble an apple, strawberry, or grape but if consumed unripe, the taste may be quite sour.

Like all fruits and berries, gooseberries are a significant carb source featuring high-fiber content with miniscule amounts of both protein and fat. In addition to the nutritional profile indicated below, gooseberries offer potassium and vitamins C and A with lesser amounts of vitamin B-6, calcium, magnesium, and iron. 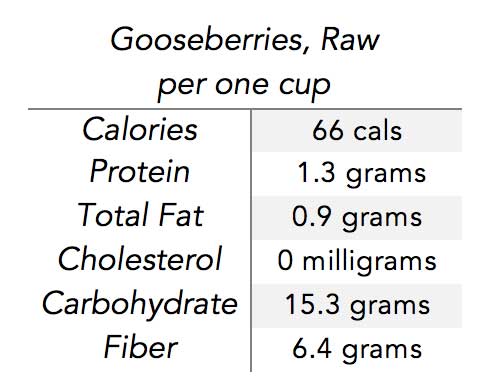 Individuals often question the intake of fruit when trying to lose weight. But rest assured, fruit (and gooseberries) can be an effective weight loss aid. Gooseberries are rich in fiber while being low in calorie, the combination ultimately promoting weight loss when further paired with a well-balanced diet and exercise.

Fiber is well-known for its role in digestive health and bowel regularity. The abundance of fiber in gooseberries (6.4 grams per one cup), can certainly encourage bowel regularity and reduce constipation risk.

Notably to its fiber and antioxidant content, gooseberries can be quite beneficial to the heart. Adequate fiber has shown to lower cholesterol levels, ultimately reducing the risk of heart disease. Powerful antioxidants are also suggested to support heart health. The iron offers oxygen-rich blood, pumped to the heart and throughout the entire body while potassium helps regulate normal blood pressure levels and heart rhythms.

The antioxidant properties of gooseberries support strong immunity. The immune system defends and fights against harmful organisms that try to attack the body and cause illness or disease. Antioxidants further aim to neutralize the invaders to protect the immune cells themselves.

The vitamin A content found in gooseberries can promote good eye health, especially reducing the risk of night blindness, a condition that makes it difficult or even impossible to see in relatively low or dimmed light. Additionally, vitamin C may prevent the formation of cataracts, or the clouding of the eye lens, that disrupts eyesight and vision.

Also noted to their antioxidant content, gooseberries promote longevity and youth even as years pass by. Specifically, vitamin E plays a large role in skin health and may reduce sun damage while also promoting collagen production, maintaining skin integrity and reducing wrinkle risk. Vitamin A may also lessen the likelihood of skin wrinkles.

6 Reasons Why You Should Never Skip Breakfast

The Truth Behind Those Starbucks Unicorn Frappuccinos & Lemonades