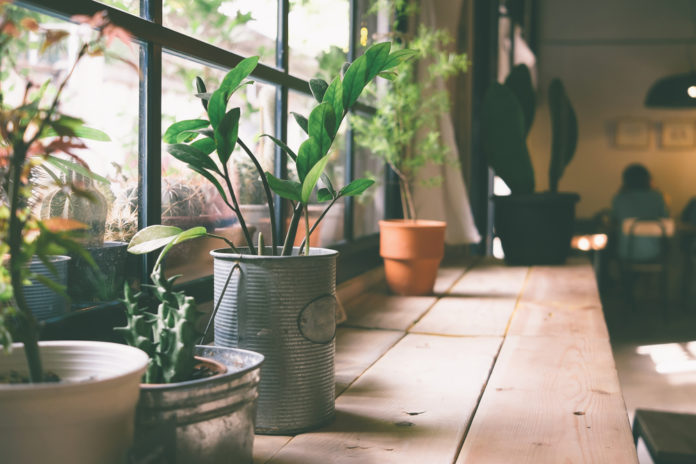 While you may have put your best foot broom forward when Spring cleaning this year, you may have missed out on a tiny-in-size, but some major concerning filth. But unlike clutter and dust, what you missed is invisible to the naked eye and challenging to wipe and sweep up. So rather than going for the duster, go for a greener, more environmentally-friendly option: Common household plants!

What Are Air Purifying Plants?

The interest of air purification plants truly blasted off nearly three decades ago, when the National Aeronautic and Space Administration (or better known as NASA) tested ways to clean air in space stations in the 1989 NASA Clean Air Study. Researchers found whereas all plants are capable of absorbing carbon dioxide and releasing oxygen, others are capable of remove toxic agents that fume common households such as benzene (found in plastics, fabrics, pesticides, and cigarette smoke), formaldehyde (common in cosmetics, dish detergents, fabric softeners, and carpet cleaners), trichloroethylene (present in disinfectants, perfumes, dry cleaning agents, and soaps). Ridding of such chemicals not only gifts a breath of fresher air, but lowers the risk of mild to severe health consequences, including headaches, dizziness, eye irritation, anemia, and cancer.

And even aside from their air purification abilities, having plants within the household is widely encouraged to mitigate the risks of Nature Deficit Disorder. Also known as NDD, Nature Deficit Disorder describes the disconnect between human and nature. Although there are numerous assumed causes of NDD, bringing plants indoors can help us reconnect to nature. Nonetheless, these 11 healthiest air purification plants can repair the link between our homes and the great outdoors.

Also known as simply “mums,” chrysanthemums boast with big, beautiful, and colorful flowers. But aside from the visual appeal, mums are of the best air purification plants, ridding of formaldehyde, benzene, and ammonia from indoor air.

Beyond their hanging green beauty, the Boston fern is acclaimed to eliminate more formaldehyde than any other plant and capable of removing benzene and xylene. Despite its beautiful and healthful advantageous, the fern deserves a little TLC and should be kept in direct sunlight, along with their leaves often needing a daily water mist.

The spider plant is effective in removing formaldehyde, particularly when provided with ample water when growing in indirect, bright light. And unlike a variety of plants potentially harmful to pets, the spider plant is considered to be safe for your furry friends!

The peace lily is not only unique in the fact it can reduce air pollutants, but is one of the few houseplants that blooms indoors. Whereas the beautiful seashell-shaped spathes gifts beauty and are relatively low in maintenance, the leaves can be poisonous to pets and children. But with care and caution, your in-home air cannot only be clean, but fresh!

Also known as “mother-in-law’s tongue,” the snake plant might be the most durable houseplant to take on; it is extremely forgiving, as it can flourish in very light bright and almost dark corners, whilst not requiring a lot of water (heavy water can even kill it)!

Reduce air pollutants and add cheer with gerbera daises. While the colorful plant does require extra sunlight for growth, keeping them flourishing may even help you sleep better once the sun goes down!

Whether lacking a green thumb or swamped with a busy schedule, the Chinese evergreen might be the right fit for you! The evergreen not only tolerates just about every indoor condition, but continues to thrive with a single watering every few weeks. In addition to its low maintenance appeal, the plant proves to remove harmful toxins from your home.

Pothos is unarguably one of the most forgiving plants, as it tolerates lower light, humidity, and cooler temperatures. And although pothos might be forgiving in regards to care, it is intolerant of common air pollutants, including formaldehyde and benzene, and potentially even odors.

Aloe vera is readily known and used for healing and cuts and burns, though the sun-loving succulent also helps remove formaldehyde and benzene from the air. And as the air purification plant occupies your sunny window, do not miss out on the five ultimate things you can do with aloe!

There is no denying the bamboo palm is an attractive houseplant and adds great appeal to an indoor landscape! But besides its curb house appeal, the bamboo palm removes formaldehyde and touted to naturally humidify the air. It also relishes in the bright, indirect light and some moisture.

Despite its assuming name, there is nothing to weep over here! More formally known as Ficus benjamina, the weeping fig has shown to efficiently remove formaldehyde, trichloroethylene, benzene, and dust. And though the plant prefers the bright light from the sun, it is also tolerant to shade.

Eager to get started? There are numerous resources to get your air purifying indoor plants growing! Stores such as Whole Foods offer houseplant and gardening advices, while HGTV provides key tips for successful plant care.

Is Your Workout Failing You? How to Fix it!

How to Create a Healthy Bedtime Routine

10 Tips to Simplify Life and Improve Any Lifestyle