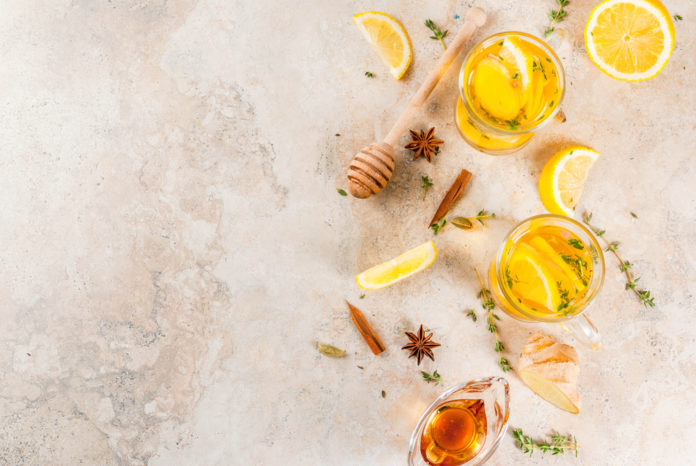 Place tea bag in your favorite mug. Bring cup of water to a rolling boil, allow to cool for a minute, then pour over tea bag. Steep for a minute or two (not too long, green tea is delicate), remove the tea bag, and stir in the apple cider vinegar, honey, and turmeric powder. Garnish with a lemon slice and ground cinnamon for greater detox gains and good measure.

The Making of a Detox Drink

Water truly is the mainstay of life and foundation of any sort of detox drink. Water flushes body waste, mainly in the urine, is the major component of most body parts and organs, and converts food to components needed for survival. Including the one cup water in this particular detox recipe, keep hydrated by consuming at least 64-ounces of water daily.

Antioxidant-rich green tea can boost the immune system and protect against cellular damage, subsequently lowering the risk of infections and chronic diseases such as heart disease and cancer. Greening your tea may also increase metabolism and reduce fat mass.

Also known as ACV, apple cider vinegar is chockfull of healthy bacteria, enzymes, and prebiotics that promotes digestive health. And thanks to its acetic acid content, ACV may partially block starch digestion and regulate blood sugars.

Coming from the turmeric plant, turmeric is a spice extremely bright in color and known for its warm, bitter taste. Turmeric root has extensive health benefits primarily related to its curcumin content, or the chemical providing its vibrant color. Curcumin exhibits potent antioxidant properties and is suggested to reduce inflammation, combat against infection, and treat number of health ailments such as headaches and arthritis.

Being a citrus fruit, lemon is rich in vitamin C and provides powerful antioxidant properties to naturally boost the immune system. Combatting from a vitamin C deficiency may also increase resistance against harmful pathogens, subsequently reducing the risk of common colds and other illnesses.

Cinnamon provides supreme anti-inflammatory benefits to this detox drink! The spice has been touted to prevent and manage a number of chronic health conditions, including diabetes, heart disease, and cancer. Newer evidence published in Metabolism – Clinical and Experimental also implies cinnamon may be a contender in the fight against obesity thanks to its fat-burning chemical called cinnamaldehyde (CA). The food compound shows to induce a thermogenic response, or the metabolic process in which the body burns calories to produce heat, to facilitate weight loss by increasing calorie burn!

8 Cooking Basics Everyone Should Know