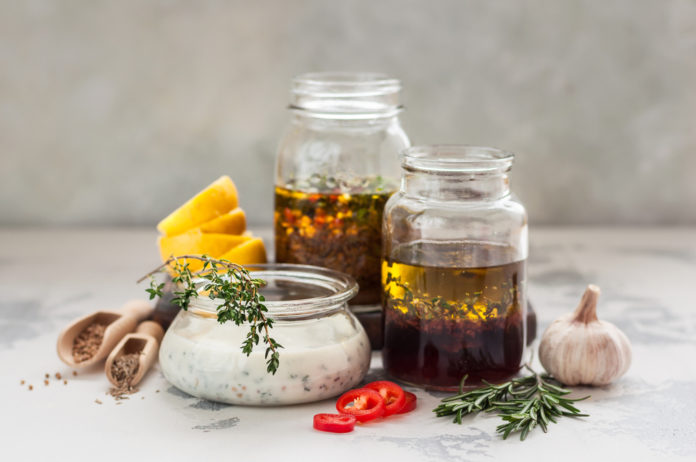 The Components of a Marinade

Don’t fear the fat! It plays an integral role in marinating, as fats and oils retain and add moisture to the meats, while neutralizing flavors of additional acids and seasonings. Olive and canola oils, full-fat yogurt, and coconut milk are commonly used in marinades.

The inclusion of acid tenderizes the meat by breaking down its connective tissue. The acidity of lemon, lime, and orange juices are regularly used in marinades, while vinegar, wine, and tomatoes are also valuable additions.

The use of herbs and spices truly sets marinades apart from one another, while also offering beneficial nutrients to your meal. Commonly used dried and fresh seasonings include basil, cilantro, crushed red pepper, garlic, onion, and shallots. Salt also contributes to a juicier and more flavor end product.

Though not always featured, some marinades contain some sort of sugar to neutralize the acid and caramelize the meat. Widely used sugars include brown sugar, agave, maple syrup, molasses, and honey. *Must be used under a lower cooking method, as high-heat may burn and result to an undesirable flavor.*

Recipes yield approximately 1 to 2 cup(s) of marinade and produce about two pounds of beef.

¼ cup each of olive oil, balsamic vinegar, Worcestershire sauce, and soy sauce and 2 teaspoons each of Dijon mustard, garlic, and onion powders

The 8 Wonderful Benefits of Pomegranate