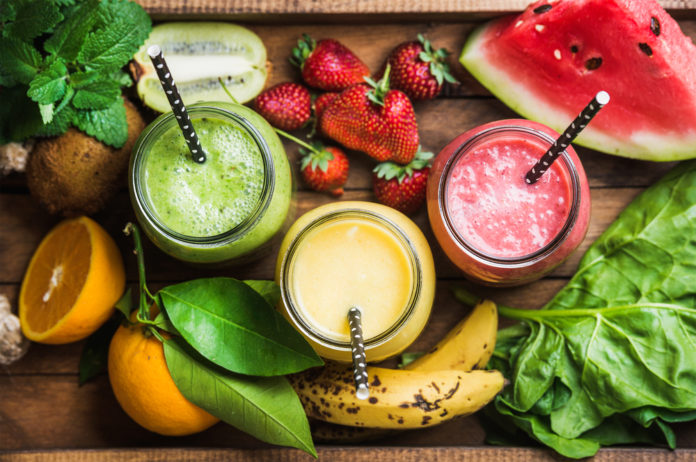 This homemade green apple pie smoothie recipe may not be an exact replica of your grandma’s secret recipe, but it is nothing short of delicious. So turn off the oven and whip out the blender, getting in those fruits and veggies has never been better. (Four servings, to be exact!)

Spice up your life with this healthy mango smoothie recipe! The subtle hint of cayenne is the perfect balance to the sweet mango, along with standing poised with numerous nutrients. So on your mark, get set, manGO!

Speaking of spice… This raspberry jalapeno smoothie is bright, spicy, and sure to get your morning throttled! Moreover, the veggie smoothie recipe is packed with antioxidants, fiber, and omega-3 fatty acids thanks to the addition of beets, apples, and hemp seeds.

Energizing, hydrating, nourishing, and cooling… Four words to describe this four-ingredient cucumber mint smoothie recipe! Nonetheless, the healthy veggie smoothie can start your day with the hydration your body longs for and the zing your taste buds crave!

Remember those small green-colored bean-shaped veggies you spread around your dinner plate as kid? Well, they have graduated into your smoothie cup as an adult! While the pea shake is slightly unusual, peas give this strawberry-banana smoothie recipe a chance!

Going green takes a whole new meaning with this ultimate green superfood smoothie! Along with bursting with green goodness, the healthy veggie smoothie is naturally sweetened with freshly squeezed OJ and raw honey, spiced with cinnamon, and protein-packed thanks to Greek yogurt.

Step aside, avocado toast! This veggie smoothie recipe is not only creamy from the avocado, but filled to the brim with powerful nutrients thanks to the harmonizing blend of greens, bananas, and other superfood ingredients.

This pear smoothie recipe is chockfull of fruits and veggies, including spinach, celery, arugula, and banana. And not to mention, the contribution of kefir or yogurt to the veggie smoothie packs a protein punch and adds probiotics to support your morning.

Blend up this peanut butter and jelly smoothie and sip on the flavors of that lunchbox classic! Also feel free to swap out the strawberries for other jelly favorites, including grapes, blueberries, or blackberries. Prefer almond butter? You can swap the PB for that, too!

Do not sleep on this sunrise sweet potato smoothie! Not only is it touted to taste like pie in a glass, but boasts with fiber, potassium, and vitamin A to rev up that a.m. engine.

Yes, cauliflower… But before turning your head away too quickly, this veggie smoothie recipe is healthy, delightfully shake-like, cool, and creamy! And really, what more could you ask for in a smoothie? Also feel free to add cocoa powder for a chocolately peanut butter variation!

Need a morning or afternoon pick-me-up? Look no further than this energy-boosting kale and pineapple green smoothie, filled with a mere five ingredients and overflowing with vitamins and minerals!

The Health Benefits of Oat Bran

Your Ultimate Guide to Root Vegetables