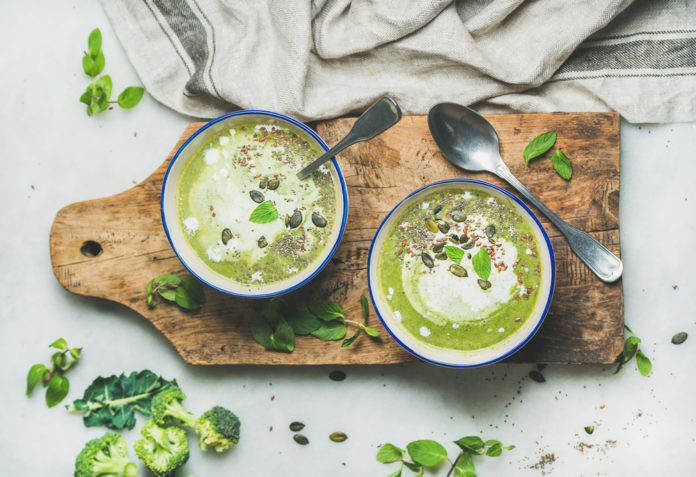 Souping is essentially an all-soup diet. And since soup is mostly considered nutritious, souping is a healthy diet to follow… Right? Though it would be easy to humbly encourage souping in a world full of confusing health and nutrition information and recommendations, the tale is not so simple. First off, most plans encourage you to consume an average of five soup servings daily, without any sort of portion limitation. The hope is to fill up on water and wholesome ingredients (such as veggies and proteins), subsequently inducing satiety, remaining satisfied, and reducing the risk of consuming empty calories that lack any sort of nutritional value.

Followers of souping are likely desiring to “detox,” “cleanse,” or shed off unwanted pounds,
mostly similar to those who seek out juicing. However, it is worthy (and imperative) to mention such diets do not produce long-term results or “flush out your system.” But in contrast to souping, juicing is essentially drinking the juice from fruits and veggie. And while fruits and veggies are a necessary and vital part of a balanced diet, juicing them strips away their valuable fiber content, mostly producing a concoction that is nothing more than concentrated natural sugars and carbs. Without any sort of sustenance, juices are likely to cause depleted energy and increase the risk of physical exhaustion. On the other hand, soups do not limit protein, complex carbs, and even fat, which can produce a balanced and nutritious meal. And other than drinking juice quickly, individuals are likely to slow down and enjoy a warm bowl of soup.

Well, it mostly depends on what you want to souping to work for… No, once again, souping
does not “detox” the body, as your body has its own personal set of detoxes, including the
kidneys and liver. That being said, it is important to tread cautiously with packaged products and juices that advertise such claims. But if you are desiring weight loss, souping certainly can assist in your health goals, particularly when displacing a calorically-dense westernized diet with nutritious soup. But nutrition experts urge its interested and current followers to realize following a soup diet is likely to be temporary, as eating only soup may cause dietary burnout. And while a nutritious and high-protein soup does offer nutrients the body requires, nutrition experts further encourage the incorporation of other foods, including occasional indulgences, to sustain long-term results. If desiring the warmth of soup, along with other nutritious meals, look no further than Balance by bistroMD! Not only do you have the options of beef barley and vegetable soup, split pea soup with ham, roasted corn and scallop chowder, and beef steak and stew, but have the opportunity to relish on other nutritious and delicious meals, including a chicken enchilada stack, macadamia crusted barramundi sea bass, merlot meatballs with grits, grilled salmon with creamy pesto, Thai coconut chicken, chipotle pineapple smoked pork street tacos (need we say more…). But beyond the extensive menu, all meals are a la cart, meaning you not only get what you want, but when you want them! So for more information on Balance by bistroMD visit the official webpage here or call 844-411- 2252 today!