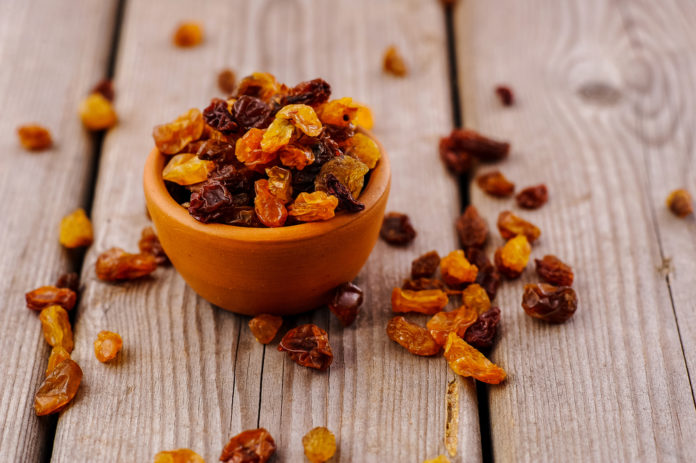 Healthy Benefits of Raisins: Are They Good for You?

According to Sun Maid, a ¼ cup of raisins contains 130 calories and are primarily a carb source, supplying 31 grams of total carbohydrate, 2 grams of dietary fiber, and 29 grams of sugar. Raisins are naturally fat-free and offers a mere 1 gram of protein. Also being a plant-based food source, they are absent of cholesterol. Raisins additionally contains valuable vitamins and minerals, including calcium, iron, manganese, magnesium, fluoride, and zinc. They also provide potent antioxidant properties related to their resveratrol, anthocyanin, and flavonoid content.

Serving as a carb source with 29 grams of natural sugar, raisins are a significant source of quick energy. Predominantly in endurance athletes, ingesting raisins can be a natural quick energy, primarily devoid of unfamiliar ingredients found in most energy gels.

The fiber content found in raisins can contribute to total daily recommendations (25 grams per day for females and 38 grams for males), which can relieve constipation and promote bowel regularity.

Raisins supply calcium, a mineral critical for maintaining bone density and strength. And considering calcium is mostly found in milk and dairy products, eating raisins is particularly valuable for individuals with lactose intolerance, a dairy allergy, or simply reducing its intake.

Raisins have concentrated amounts of phenolic compounds, including quinic, gallic acid, chlorogenic and caffeic acids. Such compounds are suggested to not only fight against cancer, but is suggested as a potential treatment alternative.

Iron is primarily found in red meats, although raisins do offer the worthy mineral. Individuals who follow a vegetarian or vegan lifestyle are at greater risk of iron deficiency, which may lead to more serious concerns of anemia. Raisins can supply iron for individuals eliminating or simply reducing animal meats.

Are Raisins Good for You?

When it really comes down to it, raisins can be beneficial to the body. They are a natural source of quick energy, while being convenient and oftentimes proportioned already. The dried variation of grapes is further suggested to contain more nutrient concentrations, though with more concentration also comes with more calories. Further importance is not solely based on the raisin themselves, but rather what they may be put in, including calorically-dense raisin oatmeal cookies or trail mix. However, everything, including raisins are best in moderation.

Battle of the Booze: Beer vs. Wine