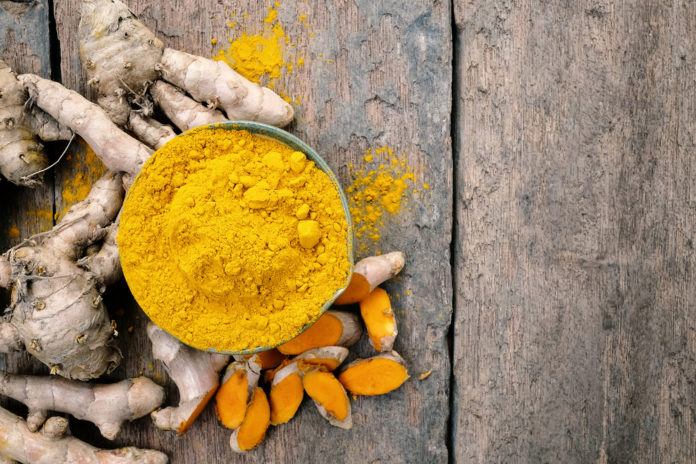 Also known as Curcuma longa, turmeric is a spice that comes from the turmeric plant. It displays a bright orange-yellow color and is mostly known for its warm, bitter taste in curry dishes.

Along with its culinary use, including in this ginger + turmeric latte, the spice is also used in alternative medicine. Thanks to its curcumin content, the chemical providing its vibrant color, turmeric consumption is suggested to reduce inflammation and combat against infection. Topically, turmeric has been applied to skin in hopes to manage skin conditions.

The spice is also rich in a number of nutrients, including potassium, manganese, copper, zinc, iron, magnesium, and vitamins B3, B6, C, E, and K.

Curcumin displays anti-allergic properties and helps combat against allergic responses. So whether seasonal or year-round, turmeric has proven to relieve those pesky allergy symptoms, including sneezing, itching, runny nose, and congestion.

People living with depression often have greater levels of inflammation in the brain, which can compromise the impact of the “happiness hormones” serotonin and dopamine.

The antioxidant and anti-inflammatory effects of curcumin may restore such hormones related to depression, eventually leading to improvements in mood.

A 2017 meta-analysis, including almost 400 patients, supports the curcumin sourced from turmeric can alleviate depressive symptoms, along with reducing anxiety.

Too much cholesterol can result in atherosclerosis, a condition when the blood arteries become clogged and stiffened, and increases the risk of heart disease.

Research has shown providing low-dose curcumin reduces total and LDL cholesterol levels in acute coronary artery syndrome, or an umbrella term for conditions in which the heart muscle is suddenly reduced or blocked from blood flow.

Dosing recommendations for OA typically involves 400 milligrams (mg) to 600 mg capsules three times per day or 0.5 grams (g) to 1 g of powdered root up to 3 g per day. For RA, 500 mg twice daily is endorsed.

Plays A Role in Alzheimer’s Disease

Alzheimer’s disease (AD) is the most common type of dementia, a general term to describe a group of conditions that impairs brain function and compromises the ability to think clearly and rationally.

Alzheimer’s is progressive and irreversible, with symptoms likely to develop slowly, worsen over time, become serious enough to impede on daily life, and eventually take the lives of those affected.

While the complexity of the disease makes it difficult to treat, curcumin has a potential role in the prevention and treatment of AD. The antioxidant and anti-inflammatory properties of curcumin have shown to improve the cognitive functions in those living with Alzheimer’s disease.

People with psoriasis have accelerated skin growth, causing new skin cells to surface in a matter of days rather than weeks. And instead of shedding off new skin cells, they accumulate and appear as raised, red, scaly patches to appear on the skin and causes an itchy, burning, or stinging sensation.

Published by the Journal of Cosmetics, Dermatological Sciences and Applications, topical curcumin has shown to be effective in reducing psoriatic activity in just 16 short weeks, with complete clearance of psoriasis in almost 73 percent of patient!

There is also evidence that topical application of turmeric can relieve itching caused by skin cancer.

Due to its many positive health outcomes, including the potential to prevent heart disease and support brain health, turmeric promotes anti-aging properties and may nurture longevity.

While the the benefits are nothing short of impressive, there certainly can be too much of a good thing when it comes to turmeric…

When dosed at appropriate levels, both curcumin and turmeric supplements do not generally have serious side effects. However, some people may experience adverse effects when taking large doses, primarily in supplement form, including an upset stomach, nausea, and dizziness, and diarrhea.

Additional considerations are warned for safe turmeric consumption for individuals who take an anticoagulant or antiplatelet, are pregnant or breastfeeding, manage diabetes, and live with acid reflux or a gallbladder-related condition.

4 Answers to Your Question: Is Frozen Yogurt Healthy?

10 Best Ways to Get Back in Shape

The Top 8 Best Ways to Get in Shape