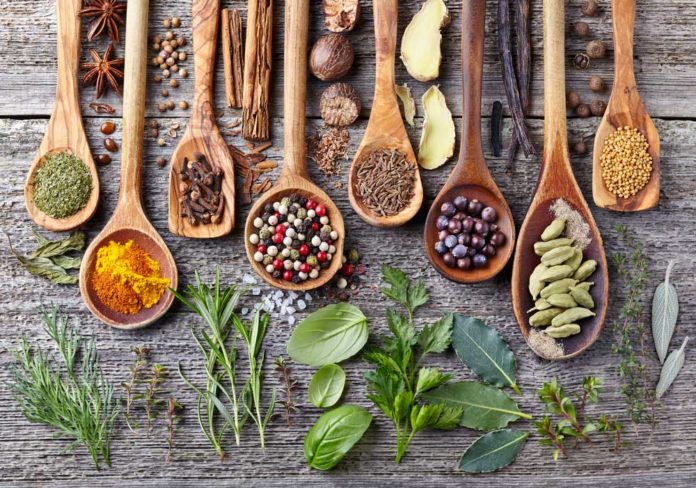 Seasonings are packed with nutrients and offer great health benefits, as most were previously and continue to be used in alternative medicine. From allspice to turmeric, discover 22 different spices and herbs and how to use them!

Your Herb and Spice Guide

Allspice resembles the flavors of cinnamon, cloves, nutmeg, and pepper. Used in its ground or whole form, allspice flavors both desserts and savory dishes, along with being a key ingredient in spiced cider and Jamaican jerk chicken.

Exuding a sweet and earthy aroma, basil is one of the most commonly used herbs in the kitchen. Also offering its flavorful appearance in pesto, the herb pairs well with a number of meat dishes, vegetables, and soups.

Cardamom is a spice described as strong and pungent, with light notes of lemon and mint. For the freshest flavor, purchase whole cardamom pods over ground to preserve the natural essential oils. Find over 30 cardamom recipes here.

Coming from a hot chili pepper, cayenne pepper offers spice to a number of dishes. From honey sesame fish tacos to Cajun pretzels, try one of these 15 amazing things you can make with cayenne pepper.

You may either love it or hate it, as evolving research suggests the genes you were born with can dictate the flavor you perceive from cilantro. While some attribute to the taste of soup, others who enjoy it describe it as a mild tasting parsley with a citrus zest. The delicate leaves should be consumed raw or added to the end of cooking, pairing well with Mexican dishes, fish, or soups and salads.

Described as woody and sweet, cinnamon is mostly known for its warm contribution in a number of spiced desserts and breakfast items, including this cinnamon apple pancake recipe. However, cinnamon can also serve double duty in savory dishes in braised dishes and soups further described here.

Kin to garlic, shallot, leek, and scallion, chives oftentimes get mistaken for green onions and scallions. Chives differ based on their extremely slender, hallow stalk though they similarly also garnish fresh green salads, baked potatoes, creamy potato salad, deviled eggs, and can be added into butters, vinegars, and sauces for added flavor depth.

Cloves offer an aromatic flavor to a number of dishes, including to enhance meats, curries, marinades, along with apples and pears. The spice is mostly known for its use in pumpkin pie, including bistroMD’s mini pies using simple ingredients to create a delicious gluten-free, heart healthy variation!

Either prepared with its whole or grounded form, cumin is a flowering plant with the seeds added to cuisines. The nutty flavor is widely used in curry recipes, as curry powder mostly consists of curry leafs, coriander, turmeric, and cumin. For a Thai twist on a Thanksgiving classic, give this pumpkin curry with shrimp recipe a try!

The feathering green leaves are commonly used in soups, stews, and for pickling hence “dill pickles.” Find eight flavorful recipes to use a bunch of dill here, including grilled carrots with lemon and dill, zucchini with yogurt-dill sauce, and golden quinoa salad with lemon, dill, and avocado!

From powdered garlic used to flavor this grilled chicken with roasted garlic velouté sauce to the whole garlic head in these roasted garlic hummus in cucumber cups, the pungent and strong flavors of garlic offer bold flavors to numerous dishes.

The root or stem of the ginger plant is often consumed fresh, dried, and in its oil or powdered form. The pungent and spicy flavor often compliments Chinese cuisine, recommended to cleanse the palate and used in herbal teas.

The refreshing herb is mostly attributed to mint chewing gum, though it pairs well with various flavors, including this chocolate mint smoothie and fizzy blueberry mint drink. Along with its value in numerous recipes, the herb also provides an extensive number of health benefits.

When there is cinnamon, there is oftentimes the presence of nutmeg. Enjoy the flavorful power duo in this healthy cinnamon-spiced mashed sweet potatoes recipe!

Orega-NO? More like orega-YES! Oregano is commonly stocked in the pantry and offers an accelerated and fresh flavor to a wide variety of foods. Add oregano to sauces and dressings, salads, and poultry.

Chopped fresh or dried, parsley offers a fresh-spring like flavor to stocks, stews, and soups. The herb can also dress up a number of dips, complement various casseroles, along with these other 25 ways to use parsley.

The strong pine flavor of rosemary pairs well with eggs, potatoes, and steak. This herb beef sirloin skewers recipe are not only loaded with flavor, but with 29 grams of protein per serving!

Described “hay-like” and sweet, saffron also offers a vibrant yellow-orange to a number of cuisines. The use of saffron ranges from chorizo and shrimp paella to lemon buttermilk pie with saffron, all described here!

Touted as the sister of rosemary, sage is a perennial woody herb displaying gray-green leaves. Sage leaves mostly complement fish and poultry dishes, along with various vegetables and sausages.

Offering a distinctive flavor reminiscent of anise or licorice, the tarragon leaves are an edible herb pairing often with fruit, poultry, seafood, and sauces. Find more information on tarragon and various uses here.

Used in both its fresh and dried forms, thyme offers a subtle yet savory note to a number of soups, stews, and roasted dishes. In addition to rosemary in the skewer recipe provided above, thyme further compliments the meat.

Turmeric is a brightly colored yellow, orange-ish spice mostly known for its warm, bitter taste in curry dishes. The spice can also be added to egg scrambles and rice dishes, tossed with roasted veggies, or mixed into soups and even smoothies.

Quiz – What Holiday Drink Are You?