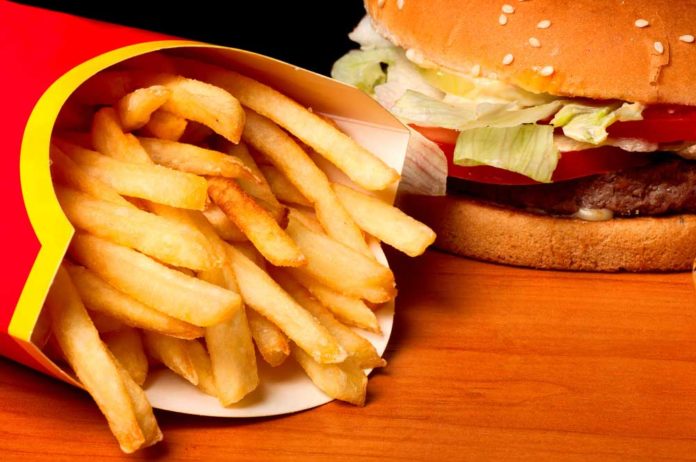 Your Meal is More Than Likely Not “Healthy”

While the cat is more than likely out of the bag on this one… It is well worth mentioning the nutritional content (or lack thereof) of most fast food restaurants, as even that salad you ordered may not be nutritionally better than a whopper-sized burger! Based on a 2,000 calorie diet, you may be consuming an entire day’s worth of total daily needs just in one sitting.

You Are Programmed to Eat Quickly

Fast foods essentially promote fast dining, programming individuals to eat quickly. But considering the mind and body take approximately 20 minutes to recognize the feeling of fullness, scarfing down food in record times may leave the body desiring more and risking the opportunity of overeating.

Looking down at a superficial view, you may not notice just how much sugar lands into your meal. From the soda machine right down to the condiments, sugar is abundant and continues to be a rising public health concern. Additionally, do not let the names of muffins misguide you into believing they are are a nutritious breakfast choice… In fact, a blueberry muffin with yogurt and honey from Starbucks supplies 53 grams of carb, 30 grams of sugar, and less than one gram of fiber. And that carrot muffin from McDonalds? Sixty-five grams of carbohydrate and 35 grams of sugar. To put this into perspective, the American Heart Association encourages men and women to limit added sugar consumption to 36 grams (nine teaspoons) and 25 grams (six teaspoons) per day, respectively.

Soda Comes With More Than Sugar

By now it is well-understood just how much sugar is packed into soda (an average of 30 to 40 grams!). But what individuals may not realize, though, is just what dispensing that sugary beverage may bring… Reports have found not only bacteria growing on soda fountains, but a type of bacteria that indicates the possibility of fecal contamination.

Eggs Are Not What They Are Cracked to Be

Just because it looks and tastes like an egg, does it really make it an egg? Critics remain skeptical. The notorious breakfast egg McMuffin includes a lengthy list of “egg” ingredients – soybean oil, natural flavors, sodium, acid pyrophosphate, just to name a few. And if you think selecting oats is a more nutritious alternative, you may want to think again… The oats served contain a loaded 32 grams of sugar, similar to a soda!

Meat May Not Just Be Real Meat

From the Chicken McNuggets resembling a Pepto-Bismal-colored toothpaste prior to cooking to the McRib degraded from various pig components and restructured into a frozen rib-less patty, those animal meats you ordered may be more than what you bargained for. And while the beef may be beef, hundreds of different cattle may be compiled into one single burger.

…And You May Not be Getting Real Cheese

“Do you want cheese with that?” may be better translated to, “Would you like cheese-colored chemicals on top of your burger and fries?” Highly processed cheese is marginally produced from milk, mostly noted as imitation cheese, and imitating the texture of plastic. So the next time you decide to add cheese to your meal next go around, truly wonder and question if it is cheese you are actually receiving.

The Sushi is Fishy…

Numerous reports suggest even some of the best sushi restaurants mislabel their sushi varieties. The deceit may be related to restaurants personally mislabeling the fish or unknowingly selling it based on external dishonesty from distributors. A dangerous parasite is also showing up more in sushi, encouraging consumers to find reputable restaurants and not be afraid to ask where the sushi originates from.

CBD for Weight Loss: A High Hope or Hoax?

What Is Cupping? The Alternative Therapy You Might Consider