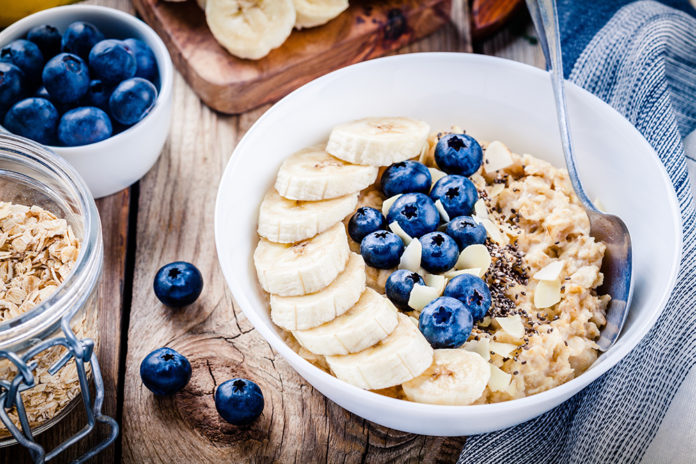 Start by preparing this six step oatmeal porridge recipe, which will act as the base, then liven up that breakfast bowl with the nutritious and delicious ideas listed below.

Top oatmeal with blueberries and pistachios or any other berry and nut combo you enjoy, including blackberry and almond or raspberry and cashew.

Make like a banana and split with this oatmeal porridge recipe! Add fresh banana, strawberry, and pineapple, grated dark chocolate, and chopped peanuts to prepared oats. (And perhaps finish it off with a maraschino cherry…)

*No baking required!* When the porridge reaches its boil and is brought to a simmer, add ¼ cup of grated carrot, ¼ teaspoon of cinnamon, and a pinch each of ground ginger and nutmeg. Top with a tablespoon of raisins.

Similar to the carrot cake recipe above, but for those who do not like to fall far from the apple tree… Swap out carrot with grated apple and add equivalent spices. Garnish with a tablespoon of roughly chopped pecans.

(And this oatmeal porridge recipe is everything nice!) Keep the warm spices of both carrot cake and apple pie, along with adding a heaping scoop of pumpkin puree and drizzle of maple syrup. Stir spices, pumpkin, and syrup together and top with chopped walnuts.

That lunchbox bliss is transformed into a healthy way to eat oatmeal! Drizzle oats with a tablespoon of peanut butter and your favorite all-natural jelly or fresh strawberries.

Not only can adding egg enhance creaminess, but boost protein content. When the porridge is brought to a simmer (NOT boiling) crack open an egg, add ¼ teaspoon of vanilla extract, and whisk over low heat. The egg white may leave small bits behind so if that discourages you, you can stick to the yolk (though the white contains the protein). Stir until the egg is fully cooked and incorporated, pour into bowl, and sprinkle with ground cinnamon.

Continuing on the egg train… Add a fried egg on top! Garnish with crumbled bacon, chopped green onion, hot sauce, and salt and pepper to taste.

For natural sweetness and added protein and calcium, add a dollop of Greek yogurt and drizzle of honey atop the oatmeal porridge recipe.

Take a morning getaway to the tropics! Prepare recipe almond as is, but swapping out water or dairy milk with coconut milk. Top with fresh mango, kiwi, and shredded coconut.

Add 1/3 cup of pitted and diced black cherries, a tablespoon of chopped walnuts, and a drizzle of maple syrup to your prepared porridge.

Once the porridge is cooked and while still warm, mix in 1 tablespoon of dark chocolate chips, ½ tablespoon of cocoa powder, and preferred sweetener as desired. Feel free to add favorite chocolate and fruit pairings, including bananas, cherries, and strawberries.

The 14 Types of Yoga Explained