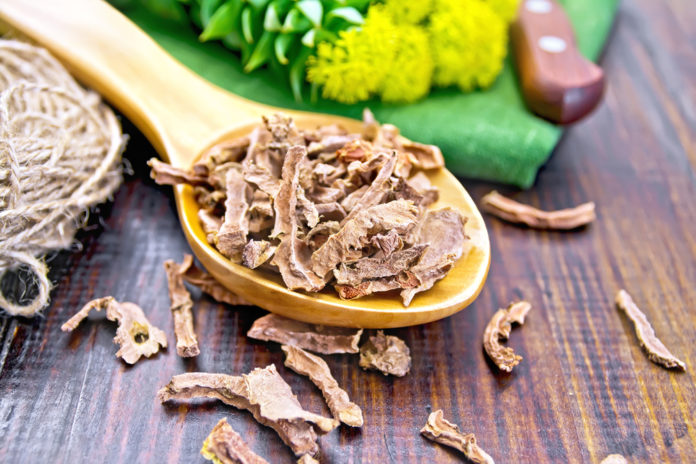 Rhodiola rosea is a plant native to the arctic regions of Europe, Asia, and Alaska with historical and medicinal use customary in Iceland, Sweden, France, Russia, and Greece – so historically dated it was mentioned by Dioscorides (a Greek physician, pharmacologist, botanist, and author) as early as the first century AD!

Rhodiola also answers to arctic root, golden root, rose root, and king’s crown. But no matter what you decide to call it, rhodiola is a well-known adaptogen.

An adaptogen is a non-toxic plant often marketed to defend against stressors of all kinds. They work by increasing the body’s ability to resist the damaging effects of stress and promote or restore normal physiological functioning to alleviate mental and physical stress.

The extract of the plant is touted to protect cells from damage and grant a number of health benefits to the body, including improving physical performance, protecting from cancer, fighting stress, and supporting heart health.

Research published in the Journal of Sports Medicine and Physical Fitness investigated the effects of long-term rhodiola rosea supplementation on physical performance.

Speaking of exhaustion… Rhodiola may be an effective treatment in individuals suffering from prolonged or chronic fatigue and weakness.

Researchers provided a dry extract of rhodiola to 100 subjects with prolonged or chronic fatigue symptoms. More specifically, the participants were given two, 200 milligrams (mg) of rhodiola over an 8-week timespan.

The researchers observed the greatest change in just after 1 week of treatment and the fatigue symptoms continued to decline further, with statistically significant improvement at week 8! The results indicated 400 mg of rhodiola daily may be advantageous for subjects suffering from prolonged or chronic fatigue, while likewise showing to be safe and tolerable.

As the hunt for the cure against cancer continues, the adaptogen may be an impressive team player for the fight.

The antioxidant capacity protect from various cancer types, including bladder and breast cancers.

Ongoing stress and anxiety can sabotage personal wellness, thus making it essential to counter against it. Whereas there are numerous remedies to boost mood, rhodiola makes it to the list.

Rhodiola has displayed antidepressant and psychostimulant effects, even proposing to be a cost-effective therapy for managing major depressive disorder (MDD). Furthermore, after taking rhodiola rosea before breakfast and lunch for 14 days, participants in a 2015 study self-reported lower levels of anxiety, stress, anger, confusion and depression.

Although there is no direct link between stress and heart disease, ongoing stress can negatively affect heart and overall health. And since rhodiola has shown to improve mood and lower levels of stress and anxiety, it may reduce the risk of heart disease.

Specific to its antioxidant content, rhodiola may protect heart cells against hypoxia, or when tissues do not receive enough oxygen. The use of rhodiola water extract may also be useful in managing hypertension thanks to its ACE-I inhibitory activities, which help to lower blood pressure by dilating and enlarging blood vessels.

How to Use Rhodiola

Like many herbs, rhodiola comes in various forms, including capsules, tablets, dried powders, and liquid extracts. But also like herbs, rhodiola is regulated as a food, not a drug, by the Food and Drug Administration and raises the risk of contamination.

For an uncontaminated product, rhodiola is usually identified and available in capsules or tablets containing 100 mg of a mixture of 3 percent rosavins and 1 percent salidroside, which are two naturally-occurring constituents sourced in the herb.

While there is also little verification on how much of it to use, clinical doses often range 200 to 600 milligrams per dose (mg/d) and given in 100 to 200 mg/d usually taken two to three times per day.

It is suggested to be best absorbed when taken on an empty stomach 30 minutes before breakfast and lunch. This also helps lower the risk of sleep interference come evening and nighttime, as rhodiola has been denoted to be slightly stimulatory.

Side Effects of Rhodiola

Though rhodiola is considered to be safe in the short-term, long-term risks are not known. But according to WebMD, rhodiola might:

As with any herbal supplement and alternative remedy, prospective users should consult with their primary care provider if interested in or taking rhodiola. They can further guide you into choosing a quality product and identify safe dosing recommendations.

Is Eating While Standing Up Bad for You