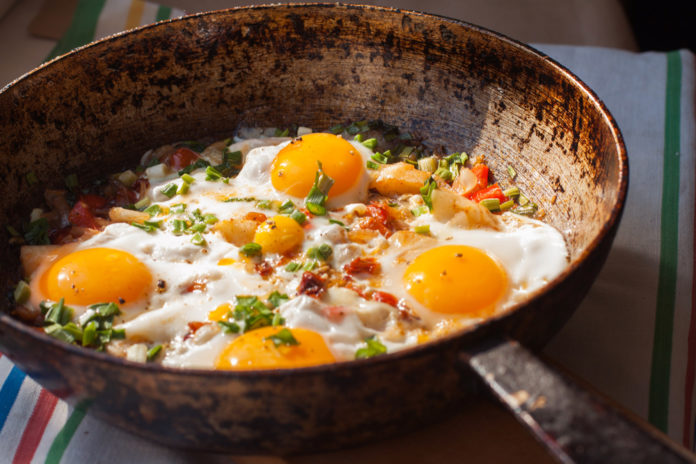 Why We Eat Eggs for Breakfast

While the debacle between the chicken versus the egg lives on, East Indian history suggests fowl may have been consumed sooner and more often than eggs, mostly to keep eggs hatching and fowl in supply. As the story goes and according to the Incredible Egg, the domestication occurred as early as 3200 BC, with Egyptian and Chinese records showing fowl were laying eggs for man in 1400 BC and culinary evidence confirming Ancient Egyptians and Roman peoples were using eggs in baked products. Historians speculate Columbus set sail on his second voyage in 1493 with the hens and eggs we know now, eventually causing a plethora of presented problems recognized in the 1920s and years after. Throughout the timespan, farmers dealt with diseases and parasite infestations, high mortality rates, and sanitation issues. But dedication, advancements in caging systems, feeding facilities, and sanitizing techniques brought us the wonderful, edible egg we know today!

But beyond the historical events leading up to egg consumption, we also crack them open today because they are…

Though eggs and the cholesterol they contain were discouraged not terribly long ago, fast forward to today, where those recommendations is not all it was cracked up to be. In fact, more pronounced data redirects the cautions to other dietary factors, lifting the weight off the cholesterol-containing egg. Eggs are also suggested to contain the highest quality of protein you can buy, while the yolks are one of the very few food sources naturally supplying vitamin D. They are also a valuable source of choline, the antioxidants lutein and zeaxanthin, selenium, phosphorus, and some B vitamins.

Along with nourishing the body with healthy food, we should also be enjoying what we eat. And while food preferences may vary, and with egg production totaling $7.55 billion during April 2017 according to The Egg Business, at least a handful of the population believe eggs are what to eat for breakfast…

While sometimes it is hard to beat a classic, egg preparation goes well beyond sunny side up and scrambled… Eggs are eggstremely versatile in the kitchen, including a breakfast frittata, black bean egg white omelet, eggnog, and these easy and healthier egg recipes provided by the Incredible Egg.

Eggs are one of the most inexpensive, all-natural, nutrient-dense foods available. In fact, at an approximate 17 cents per serving, eggs are considered the least inexpensive source of high-quality protein. So if you have ever heard, “Healthy eating is expensive!” eggs can be your budget (and waist) friendly solution!

Beyond the interesting upbringing of one of the favorite breakfast staples, additional fun facts of eggs include: