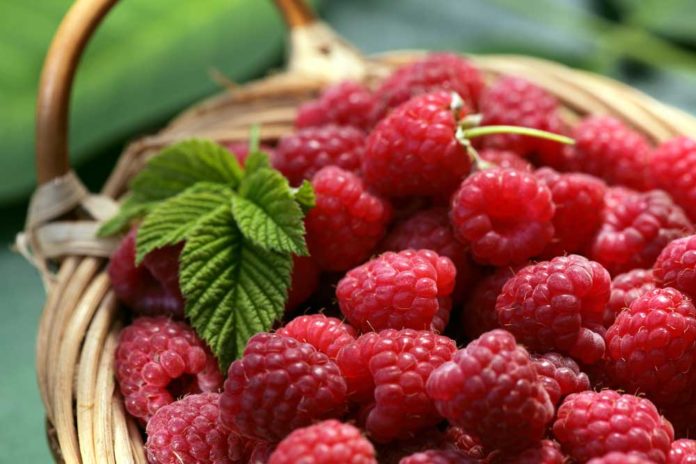 It is deep-rooted vibrant berries have a well-earned place in a nutritious diet. The benefits of berries may even be overshadowed by their favorable eye and flavor appeal. But when examining and digging a little deeper, it is certain small berries, raspberries included, offer larger benefits than what meets the eye! From popular red and black to purple and yellow varieties, take a bite out of nature’s sweet “candy” and reap these seven incredible benefits of raspberries!

According to the United States Department of Agriculture (USDA) National Nutrient Database, one cup (approximately 120 grams) of raspberries offers 64 calories, 1.5 grams of protein, 0.8 grams of fat, 15 grams of total carbohydrate, and 8 grams of fiber, mostly in soluble fiber form. Raspberries also provides a large amount of vitamins C, E, and K, manganese, folate, iron and potassium, with lesser amounts of thiamin, riboflavin, niacin, calcium, vitamin B6 and other valuable vitamins and minerals. Additionally, they are considerably known for the potent antioxidant content, primarily in the forms of polyphenol and anthocyanin, providing raspberries their rich and vibrant color.

The high fiber content of raspberries is significantly beneficial to digestive health. Per one cup, raspberries provide 21 and 32 percent of daily fiber for men and women, respectively. Individuals consuming the recommended fiber intake also lessen their risk of hemorrhoids, cancers of the gastrointestinal tract, and other conditions affecting digestive health.

Oh the benefits of fiber… Raspberries’ high fiber content not only contributes to improved digestive and heart health, but may be beneficial for diabetes management. High-fiber diets can assist in stabilizing and regulating blood sugars, ultimately lessening the risk of diabetes-associated complications.

Berries across the board are touted for their potent antioxidant properties, further leading to continuous studies regarding their anti-cancer properties. Various studies have further demonstrated black raspberries have the ability to inhibit tumor formation in the oral cavity and other forms of cancers, including of the esophagus, pancreas, prostate, and lungs.

Raspberries’ high vitamin C content may protect the eyes against damage, including the formation of cataracts. An antioxidant it supplies, known as zeaxanthin, is also speculated to play a protective role in eye health.

Further harping on vitamin C, its powerful antioxidant activity (along with the other antioxidants raspberries contain) may defend against aging. The vitamin also plays a vital role in collagen production and has shown to protect the skin of ultraviolet (UV) light, which may in turn lessen the risk of skin cancer.

In addition to raspberries’ health benefits, one of the greatest assets is its versatility, making its pronounced effects that much easier to obtain. Raspberries are enjoyable on their own, but can also be produced into jams, mixed into cereal and yogurt, or blended into this peach, raspberry, and basil protein smoothie.

As a final note, it is important to stay weary of promoted supplements, including the popular raspberry ketones. To date, there is no confirmed data that proves its effectiveness. Rather than being persuaded with such products, most healthcare experts encourage the intake of whole foods (including fresh, whole raspberries) over such products that are generally filled with unwanted, potentially harmful ingredients and devoid of fiber and other valuable nutrients.

11 Fun Ways to Use Aquafaba in a Vegan Diet