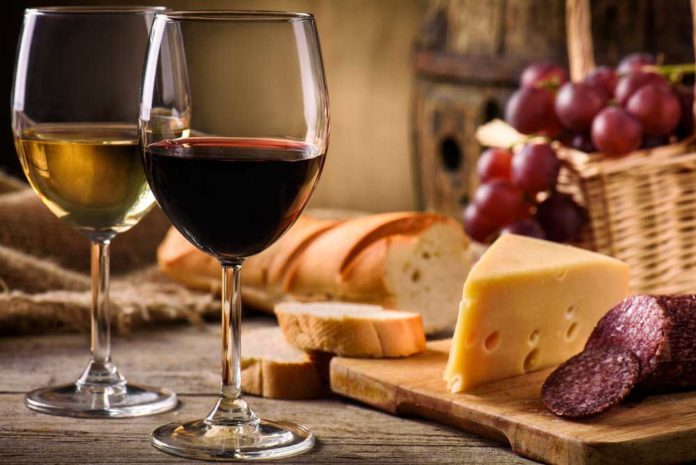 Despite its popularity, wine lovers may be divided when it comes down to choosing between red or white wine, and research states one may be a healthier choice than the other.

First off, both wines are produced from fermenting grapes, though the type of grape differentiates between the two – red wines are made from red grapes, while white wines are produced from green. So with grapes being fruit and with fruit correlated to health, both should be nutritionally equal, right? Well, kind of. Although the type may cause disparities in the nutrient content, most red and white wines contain approximately 125 calories and 4 grams of carbs per 5-ounce serving. But beyond counting calories and carbs, both red and white offers nutrients, although one wine may have an upper hand over the other and offers a greater concentration of the following:

Move over bananas, wine is also rich in the mineral and electrolyte imperative for normal muscle contractions of red muscle fibers. Maintaining and increasing potassium intake may also lower the risk of stroke, osteoporosis, and kidney stones.

Mostly known for being in eggs, choline is essential for normal brain development and may encourage memory and communication between brain cells.

Red meat is not the only source of blood-oxygenating iron… Wine also supplies the mineral imperative in facilitating oxygen into red blood cells, and delivering it to all parts of the body.

Magnesium is critical for DNA and RNA production, along with roles in bone development, growth, and maintenance. Newer findings suggest magnesium may protect against coronary heart disease (CHD), also known coronary artery disease (CAD), a condition in which plaque builds in and narrows arteries, limiting oxygenated, red blood to the heart.

From the dropped hints you may have assumed…

Along with being a richer source in the nutrients outline above, red wine’s resveratrol content is mostly acknowledged and researched. Resveratrol is a potent antioxidant, protecting cells against damage, with most of red wine’s benefits stemming from it. Resveratrol becomes more concentrated during the fermentation process, while being more potent in red over white wine. Researchers have correlated resveratrol to numerous health advantages, including good heart health, cancer prevention, anti-aging, and cancer prevention. Additionally, a more recent study suggests resveratrol may improve blood vessel health in individuals with type 2 diabetes by lessening artery stiffness (diagnostically known as arteriosclerosis), which lowers the risk of heart attack and stroke. Interestingly, too, while red wine has shown to protect against cancer, white wine has recently been linked to an increased risk of skin cancer.

Ultimately, health experts suggest the most healthful route is not necessarily choosing between the two, but mostly encouraging nondrinkers to not pop the wine cork. But if you are to drink, recommendations suggest men to limit alcohol consumption to two drinks per day and women to one. And when pouring a glass of wine, a serving is considered to be 5-ounce pour, not the entire bottle… Along with sticking to portions and serving sizes, optimize health by consuming a nutritious diet filled with whole foods, partaking in physical activity most days of the week, sleeping the recommended seven to nine hours of sleep each night, and reducing stress with healthful approaches (not with binge drinking, emotional eating, or other harmful strategies).