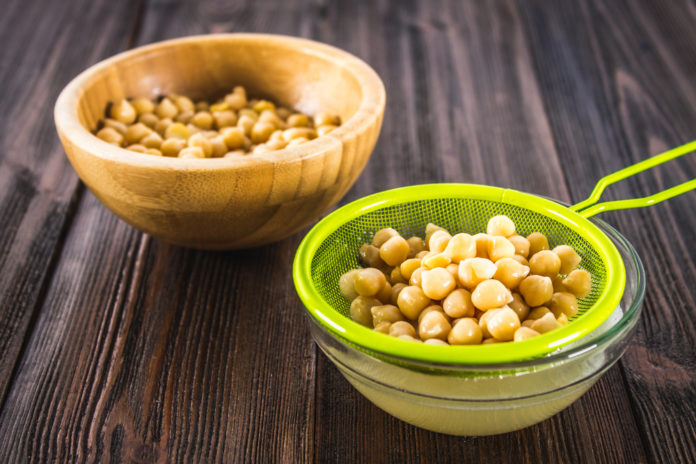 According to the official Aquafaba website, aquafaba (AF) is “the common name for the cooking liquid of beans and other legumes like chickpeas” and translates as “bean water” in Latin. The thick liquid results from soaking or cooking legumes in water for an extended period of time, in which its unique mix of starches and proteins migrate from the seeds to the water. The resulting product provides aquafaba its distinctive characteristics to emulsify, foam, bind, thicken, and gelatinize in a number of vegan-friendly recipes, including mayonnaise, butter, meringue, ice cream, and cheese.

With such newness of aquafaba, the nutritional content of aquafaba was just recently performed. The current analysis was tested on 365 Everyday Value’s no-salt added garbanzo beans, primarily chosen based on its absent sodium and desirable consistency for variable applications. The evaluated aquafaba contains about three to five calories per tablespoon, with such minimal concentrations of other nutrients to even register on a U.S. Food and Drug Administration (USDA) food label. But contributing to its desirable cooking characteristics, aquafaba is predominately starch and protein, with any sort of lipid (or fat) also undetectable in the analysis. Find more specifics regarding its nutritional composition here.

With aquafaba being so immature the research world, there is still a great opportunity to explore the welfares it may offer to health. But despite the underdeveloped data up to this point, its users and health enthusiasts tout the following benefits of aquafaba:

Being solely produced from chickpeas or another legume, aquafaba is plant-based and valuable for those following a vegan lifestyle. And with such versatility it offers in cooking, including acting as a vegan egg substitute, aquafaba offers opportunities for plant-based eaters to enjoy numerous recipes, including these 11 ways described here!

With such minimal nutritional content, the use of aquafaba makes it beneficial for individuals watching calories within their diet. While aquafaba itself is low-calorie, it is still important to pay attention to the added ingredients that contribute to the total caloric volume. For instance, one tablespoon of real mayo provides approximately 90 calories and 10 grams of fat while the aquafaba-based, vegan-mayo (known as Fabainase) is nutritionally equivalent and formulated with sunflower oil. Regardless of the chosen source, individuals should still be mindful of serving and portion sizes.

Aquafaba can mimic the consistency of eggs and dairy, making its use extremely valuable for those who choose or need to avoid them. As mentioned above for individuals following a vegan lifestyle, aquafaba can transform previously “off-limit” foods into “safe” products, ultimately allowing individuals to expand their food repertoire. Along with being devoid of dairy, aquafaba is considered to be gluten-free.