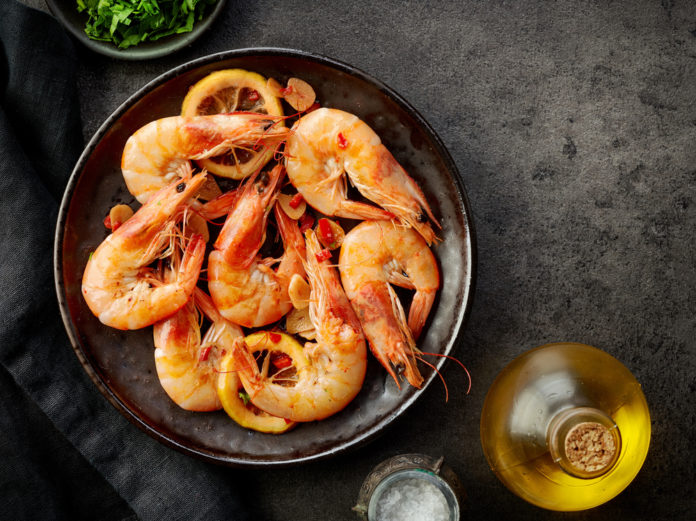 Whether broiled, baked, fried, or steamed, shrimp is considered to be extremely popular, accounting for a quarter of seafood consumption in the U.S. However, there are raising questions regarding its profit or concern regarding health. But what benefits may shrimp offer and should its enjoyers be fishy of its intake?

The caloric content of shrimp matches its weight in grams, i.e. one gram of shrimp offers one calorie and so on. That being said, 85 grams (approximately 3-ounces) of shrimp supplies 85 calories while also providing 20 grams of protein, less than one gram of both carbohydrate and fat, and 120 milligrams of cholesterol. Shellfish is also a significant source of astaxanthin, the reddish pigment providing shrimp its displayed color, the notorious omega-3 fatty acid, and other valuable nutrients, including selenium, vitamin B12, phosphorous, and vitamin D.

The calories in shrimp are low while the protein and nutrient counts are ample. Consuming nutrient-dense and high protein foods is continuously encouraged for weight loss along with maintaining a healthy, lean body mass.

Astaxanthin has shown to be quite a valuable player in maintaining good eye health, including protecting the retina against oxidative damage, especially from excessive sunlight exposure. Early data suggests astaxanthin, in conjunction with other nutrients, can improve problems affecting the center of the eye.

Shrimp and shellfish contain both phosphorous and vitamin D. Working with calcium, the supplied nutrients can help strengthen bones, subsequently lessening the risk of bone fractures and osteoporosis later down the road.

Shrimp contains tryptophan, which is thought to trigger the mood-lifting hormone known as serotonin. The combination of shrimp’s omega-3 and vitamin B12 content may improve brain function, keeping it sharp and alert, and preventing against Alzheimer’s disease.

The potent antioxidant properties of both astaxanthin and omega-3 fatty acids may exhibit protective and inhibitory affects on cancer, therefore reducing the growth of cancerous cells. And interestingly beyond its intake, researchers are now utilizing shellfish as a means to explore their incredible eyesight for clues in cancer detection.

Along with sunscreen and other skin-protecting precautions, supplementing with astaxanthin can reduce skin wrinkling by improving skin elasticity and offering skin moisture. Astaxanthin can also reduce skin damage from ultraviolet (UV) light, ultimately reducing the risk of skin cancer.

Although the high cholesterol content has provoked worry regarding shrimp intake, research indicates there really is no harm in consuming that beloved shellfish. In fact, shrimp can actually protect against heart disease, thanks to its omega-3 fatty acid content, as evidence has shown shrimp consumption can reduce LDL (or “bad”) cholesterol and triglycerides, all while raising HDL (or “good”) cholesterol. Shrimp also supplies omega-3 fatty acids, notoriously known for its role in heart health and anti-inflammatory properties.

Shrimp can be an integral food item to benefit women’s health. Astaxanthin has been shown to reduce hot flashes, joint pain, and moodiness that often surfaces during menopause. The contribution of omega-3 fatty acids may ease the symptoms of premenstrual syndrome, also known as PMS, including mood swings, tender breasts, food cravings, fatigue, irritability, and depression.

Although shrimp can reel in extensive health benefits, there are fishy cautions that should be considered. It is important to stay weary of…

When ordering and purchasing shrimp, you may not think twice what you are about to consume really is not shrimp. However, some restaurants may actually be serving mock meats that resemble the shellfish, whether or not they realize it themselves. In fact, a study produced by Oceana, revealed out of 143 products tested, only 30 percent were misrepresented as shrimp. They also found “that consumers are often provided with little information about the shrimp they purchase, including where and how it was caught or farmed, making it difficult, if not impossible, for them to make informed choices.”

The shrimp may be naturally or chemically contaminated, including the impurities of dioxins, PCBs, hormones, and antibiotics. In fact, most of the shrimp consumed is imported from “farms,” or large industrial tanks or shallow, man-made ponds. And without tight environmental care and control, harmful bacteria can begin to grow and pollute the shrimp.

Crustaceans are considered to be one of the top food allergens, even being one of the most dangerous and sending more people to the hospital than other allergens. However, those allergic to shellfish are also not necessarily allergic to other fish varieties and vise versa. Find more information on shellfish allergies here.

Ultimately, you should remain cautious of the type of shellfish consumed, as even wild-caught shrimp may be feasting on potentially toxic compounds at the bottom of the ocean. And as mentioned above, it may be difficult for consumers to know what exactly they may be purchasing and consuming. So if you are to choose, and after understanding the potential precautions, try finding a product that confirms its origin, including “wild-caught in U.S.A.” Shrimp should also not be slimy, though should smell like the sea. A strong ammonia odor may indicate a spoiling or bad shrimp. Find more detailed descriptions and explanations regarding the safety of shrimp here. But with careful cautions, you can enjoy and obtain the eight health benefits of shrimp indicated above!

10 Healthy Breakfast Pizzas to Get You Out of Bed