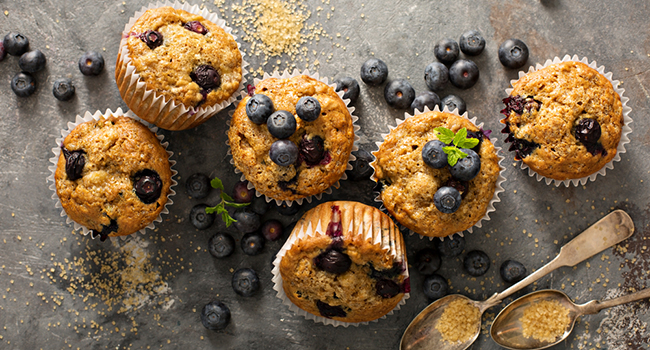 Whether banana nut, blueberry, or cinnamon apple, do not let those fruity breakfast muffins mislead you… Muffins purchased from bakeries and store shelves tend to be loaded with sugar and may not be much better than that donut you made a conscious attempt to avoid.

So maybe you made more of an effort to sit down to a bowl of cereal rather than breakfast muffin on-the-go. However, whole grain cereals tend to be nutritionally-equivalent to those colorful boxes from your childhood and contain heaping amounts of sugar. And those convenient oatmeal packets? They are also likely loaded with sugar and just one more reason why you should be making these overnight oats.

Yogurt appears as a nutritious snack from the exterior, offering offering calcium, protein, and natural carbohydrate to kick start your day or succumb that midmorning snack attack. But spoon in a little deeper, yogurt is loaded with added sugars, especially if promoted as a fruit flavor. For a more nutritious yogurt option, go for a plain Greek yogurt filled with protein and add natural sweetness with fresh fruit and cinnamon.

Oh and that granola you decided to top onto your yogurt…? Most varieties are filled with sugar, corn syrup, and oils.

And those granola bars are oftentimes not much better than its crumbled cousin, as most varieties are even comparable to a candy bar! To keep the desirability of granola bar’s convenience, prepare these portioned energy balls, free of unwanted ingredients and loaded with nutrients and flavor.

But back to yogurt: Though often presumed as a more nutritious option, is frozen yogurt actually healthy? Simply put, frozen yogurt tends to be loaded with sugar and add on the toppings, it is oftentimes not much better than other dessert options.

While the words “unhealthy fruits” seems like an unlikely pairing, it becomes more of a reality when it comes to dried fruits. Compared to their juicier counterpart, packaged dried fruits often contain added sugar and sulfur to make them more shelf stable. And although dried fruits do contain fiber and other nutrients, a fresh piece of fruit is much more filling and fewer in calories per serving.

The logic seems apparent: Fruit is healthy, therefore packaged fruits are a good call. But most packaged fruits, such as fruit cocktails, are prepared with a sugary syrup that does nothing but add on unnecessary, innutritious calories.

The nutritional value of veggie chips can be conflicting, particularly as veggies boast with nutrients and, well, chips tend to lack nutritional value. But when it comes to the combination of “veggie” and “chips”, do not let “veggie” in front of the name lead you astray, as they often lack adequate nutrients and should not displace veggies in their raw or cooked form.

Although some veggie burgers are filled with legumes, veggies, and whole grains, those served at restaurants or prepackaged are often loaded salt and potentially over 20 added preservatives!

Yes, nuts and seeds are a valuable healthy fat. But when combining them with chocolate chips, dried fruit varieties, and sugar-filled yogurt pieces to produce a “healthy” trail mix, you might as well be opting for a nut-based candy bar.

While the amount of dressing used should always be considered, the type used also needs to be factored. Even as “fat-free” salad dressings seem like a healthier option, they are often packed with sugars and sugar substitutes.

If you ration healthfulness, a greater portion, or an extra serving based on being titled “sugar-free,” you may want to read on… While so-called “sugar-free” cookies, cakes, and other sweet treats may be devoid of refined sugar, it is also likely filled with artificial sweeteners and other unwanted ingredients to compensate for underrepresented flavors in these sugarless products.

Similar to fat-free salad dressings, reduced-fat peanut and other nut butters may come with more than you bargained for. The best route is selecting a nut butter prepared with the identified itself and potentially a little salt.

While sushi is often thought to be a healthier restaurant choice, those house-specialty rolls that include mayo, cream cheese, and are deep-fried anything fried? Something sounds fishy… Ultimately, do not be misled just because something is wrapped in seaweed.

Let this meaty fact sink in: Processed meat consumption has sufficient and convincing evidence that it is carcinogenic (cancer-forming) to humans, with 34,000 cancer deaths per year associated to diets filled with highly processed meats. But whether it be turkey bacon or chicken nuggets, processed meats are proteins that go under some sort of transformative process such as salting, curing, and fermentation to enhance flavor and increase preservation. Although the exact “safe” level of processed meat is unidentified, individuals should limit processed meats to once or twice per month.

While swapping out regular soda for diet seems like a health-conscious decision, health experts and researchers argue otherwise. Diet soda is still not so great for the body, as the artificial sweeteners in diet soda may still cause weight gain, increase waist circumference, spike blood sugars, and compromise good oral health.

Yes, plant-based milks are a viable choice for those desiring or needing to limit dairy from the diet. And while the flavors of vanilla and chocolate are nonetheless tempting, most flavored favorites are oftentimes filled with sugars, artificial sweeteners, oils, and other unwanted ingredients.

Fruity in taste and color, smoothies seem harmless from the exterior. And while some smoothies can nourish the body and even aid in weight loss, the convenient smoothie packets or ones grabbed through a drive-thru may be hindering your weight loss success by lacking ample protein source, which lends quick energy that only plummets and leaves you hungry within the next hour or two.

Similar to the concept of fruit smoothies, juices may also be nothing more than concentrated sugar. Nutrition experts encourage individuals to go for a whole piece of fruit, rather than its juiced counterpart left without its valuable fiber content. And if you are to go for juice, look for a real fruit juice (not the ones made from concentrated sugars) and stick to a recommended 4-ounce glass.

Sports drinks are essentially nothing more than water mixed with sugar and electrolytes, which makes an ideal choice for athletes who workout longer than an hour or in the hot heat. But for a short indoor workout or a sugary beverage? You may want to reconsider and opt for a glass of hydrating water.

What Is Carambola and the 6 Health Benefits of Eating It