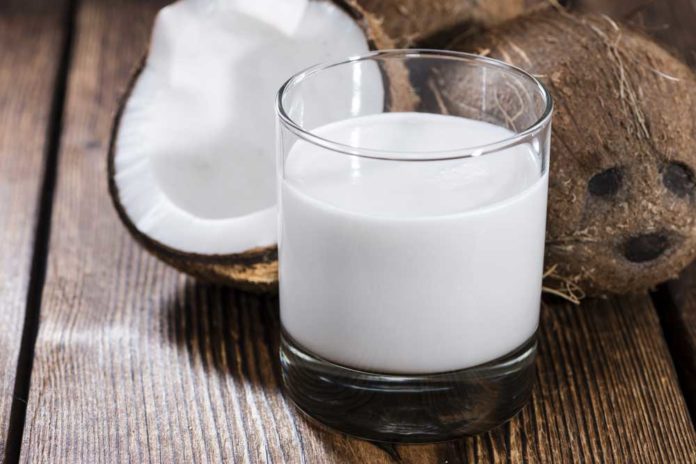 Unlike most would reasonably believe, coconut is not an actual nut, but technically a drupe – a fruit offering an outer flesh, surrounded by a hard shell, with a seed inside. The pinpointed origin is unknown, although researchers speculate Malaysia and South America are likely regions for the coconut’s upbringing. Despite its vague beginning, coconut excels use across at least 70 countries in various forms.

Highlighting on coconut milk, it is exactly what its name suggests, a milk produced from that notorious tropical “nut” or drupe. Not to be confused with coconut water, the milk liquid from the nut’s center, coconut milk is produced from the coconut’s white, meaty flesh. Coconut milk is generally found fresh or commercially produced in cans and cartons. The use is often dependent on its processing technique, or specifically the method of squeezing and thinning the coconut cream. Thicker products are mostly used for rich desserts, thinner milk used for soups and curries, while the thin, fluid milk is mostly used as a dairy-free milk substitute.

Below breaks down the nutritional composition and compares two coconut milk variations and dairy milk. It is important to note public commercial products strain some of the fat, making it a “lighter” version. Real, full-fat milk is rich in calories and should be consumed in moderation or incorporated into recipes.

Coconut milk is also an excellent source of valuable B vitamins and vitamins C and E, along with minerals including phosphorus, copper, iron, selenium, calcium, manganese, and magnesium.

Coconut milk is a significant source of both calcium and vitamin D, especially when fortified in commercial products. Product brands average the daily values (DVs) of 45 percent calcium and 25 percent vitamin D. Calcium and vitamin D are one bone-strengthening power duo you do not want to miss out on, as the pair fosters and strengthens bone density and structure. Its valuable phosphorus and manganese content further aids in bone metabolism.

Though saturated fat is considered to be harmful to health, research is starting to suggest otherwise. Specifically, saturated fat may not be as heart-clogging as previously thought. The use of coconut and its products, a heavy source of saturated fat, has shown to actually reduce LDL or “bad” cholesterol while improving HDL or “good” cholesterol. Iron, the mineral responsible for oxygenating red blood cells, further promotes cardiovascular health. Coconut milk’s copper content increases the absorption of iron and aids in increased red blood cell formation as well.

Coconut milk contains lauric acid, a type of saturated fat found in several vegetable-based fats. Lauric acid is oftentimes extracted from coconut to develop monolaurin, an antimicrobial agent used to treat viral infections including the influenza (flu). It ultimately can boost the immune system and further fight against bacteria and yeasts.

Suggestive to lauric acid, the type of saturated fat is additionally a medium-chain triglyceride (MCT). MCTs oils, compared to long-chain triglycerides (LCTs), are proclaimed to bypass typical fat digestion. This atypical digestion route suggests MCTs do not become stored in fat cells and may aid in weight loss when consumed in moderate amounts.