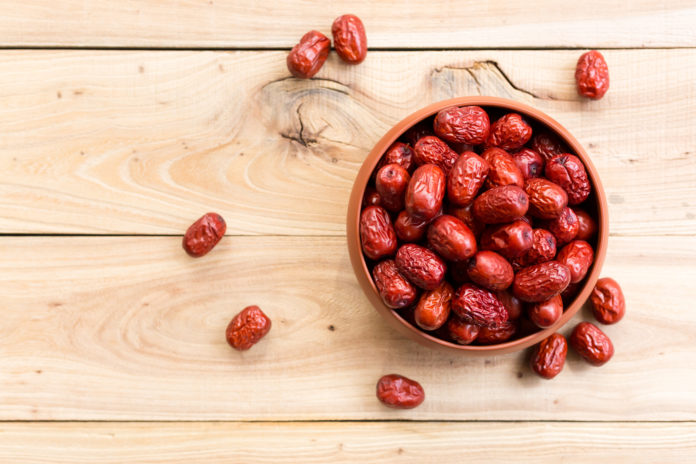 Commonly used in Traditional Chinese Medicine, the jujube fruit has grown interest in the modern health world. But what exactly is jujube and what exactly makes it so unique compared to other fruits? Find out the jujube health benefits here!

What Are Jujube Fruits, Dates, and Drupes?

A ju-jube! But not to be confused with the candy, this jujube is the fruit of Ziziphus jujube. Jujube has been widely used as food and Chinese herbal medicine for over 3,000 years and also known as a Chinese Date, Korean Date, Indian Date, Red Date, Ziziphus Jujuba, and Da Zao.

Ziziphus jujuba is techniquelly a drupe, a fruit baring a fleshy outer part that surrounds a single stone. An immature jujube is green in color, though it goes through a yellow-green stage featuring mahogany spots as it ripens. When fully matured, jujube becomes entirely red and eventually softens and wrinkles.

Jujubes are often consumed fresh between the yellow-green stage and the full red stage, as the flesh is crisp, sweet, and reminiscent of an apple. Jujubes that are dried and matured are often called jujube dates, as they are dark brown and wrinkly with a flavor similar to traditional dates. Jujube can also be consumed as an herbal tea.

When it comes to the dates’ fruit nutrition, it is predominately a carb source, especially providing fructose, glucose, and fiber. However, the fruit also supplies essential unsaturated fatty acids, some amino acids, vitamin C, vitamin A, selenium, magnesium, potassium, zinc, iron, and other micronutrients and antioxidants that lend its supposed health benefits.

Jujube has been widely used as food and Chinese herbal medicine for over 3,000 years. Despite its longstanding. Here is how the research stacks regarding jujube benefits:

An herbal concoction of licorice, wheat, and jujube was traditionally prescribed for women suffering from anxiety, according to a review of dietary ziziphus jujuba fruit. There is some evidence showing an extract of jujube possessed anxiolytic effect at lower dose and sedative effect at higher dose.

One of the most historical uses of jujube was its claimed ability to calm the mind and improve sleep quality, particularly related to its sedative effect. While it may not be the best treatment for insomnia, as gaining control over sleep varies from person to person, both the fruit and seed are rich in the natural sleep-promoter saponin.

Jujube has shown to improve lipid profiles and other anthropometric measurements. In fact, an extract dose of 5, 15, and 30 grams of jujube daily lead to significant reductions total cholesterol, LDL (or “bad”) cholesterol, body mass index (BMI), fat percentage, and overall body weight. A 30 grams per day dose lead to reduced triglycerides and elevated HDL (or “good”) cholesterol. Improving these parameters and measurements lowers the risk of a multitude of chronic health conditions, including heart disease, diabetes, and metabolic syndrome.

Ziziphus jujuba extract is an effective and safe treatment for chronic constipation, according to research published in Digestion. In fact, symptom severity ratings decreased and quality of life scores improved in those receiving jujube. Jujube is also used to treat digestive problems such as lack of appetite and diarrhea.

Jujubes are chockfull of essential vitamins and antioxidants that can help boost the immune system, especially its rich concentration of vitamin C. The is a well-known link between vitamin C and immune function. A deficiency in vitamin C can results in impaired immunity and higher susceptibility to infections, while dosing with it appears to be able to prevent and shorten the duration of infections.

Pharmacognosy Review touts jujube as “a red fruit with promising anticancer activities,” particularly its triterpenic acids and polysaccharides that demonstate to have antiproliferative (used or tending to inhibit cell growth) and anticancer effects on various cancer cells. And with cancer being a leading cause of death worldwide, this is a possibility deserving of continuous investigation.

The anti-inflammatory and antioxidative properties of jujube are touted to promote skin health and relieve dry skin. Furthermore, jujube has been used to treat various disorders of the skin such as acne, eczema, and psoriasis.

Especially in its fresh, dried, or brewed from, consumption of the jujube fruit is considered to be safe. According to WebMD, though, safe dosing recommendations of zizyphus and its extracts are not well-known at this time and can be contingent on several factors, including the prospective user’s age and health status. WebMD correspondingly proposes the following warnings and special precautions:

Should you take jujube?

More studies are needed to verify jujube’s healing potential as used in Traditional Chinese Medicine. However, there is no doubt jujube can be an enjoyable fruit to diversify and shake up your produce drawer. And considering their potential to possess health benefits, jujubes are certainly worth exploring!

Should You Drink Water Before You Go to Bed?