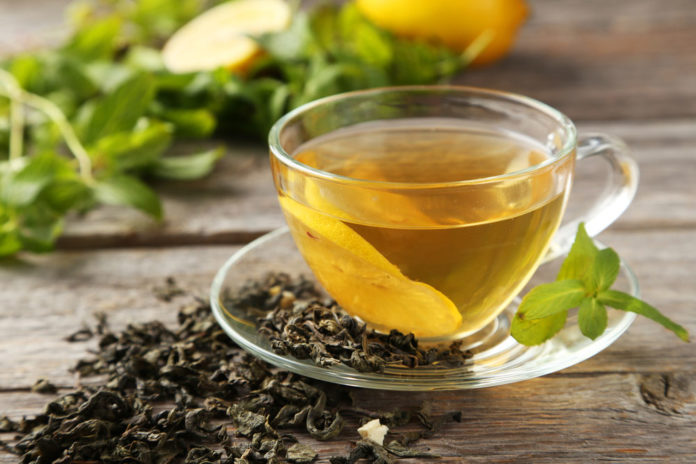 Green Arriving to the Tea Party

Green tea is one of the four common types of tea – black, white, oolong, and the popular green. Despite the color variations, they commonly stem from a plant called Camellia sinensis. Out of the teas, white tea is the least processed while black tea leaves are mostly fermented. Since green tea leaves are not fermented but rather steamed, they tend to preserve more of the nutritional characteristic. Specifically, the benefits of green tea are mostly attributed to polyphenols, phytochemicals found in plant sources with highly potent antioxidant properties. Catechins, a type of polyphenol, are robust in green tea, even more so than both black and oolong teas. Catechins are further broken down into subtypes, though the most potent in green tea is epigallacatechin-3-gallate (EGCG), with one cup generally containing 100 to 200 milligrams.

Simply put, metabolism describes all chemical reactions occurring in the body to maintain life, though most describe its rate as a weight loss hinderer or supporter. Nonetheless, the consumption of green tea has shown to increase and accelerate metabolism.

An accelerated metabolism fosters weight loss, especially if paired with a well-balanced diet and exercise. It is important to recognize green tea supplements and pills cannot magically melt away pounds, as there is no “magic pill” to weight loss.

Though the research is inconclusive, some evidence supports the relationship between lower risks of diabetes and higher intakes of green tea. And with weight being a significant risk factor for developing type 2 diabetes, green tea may lessen diabetes risk by supporting weight loss.

Though slightly inconclusive, studies have demonstrated that drinking green tea can improve blood lipids. More specifically, levels of cholesterol and triglycerides may lower with a green tea supplement.

Not only can healthy lipid levels promote a healthy heart, green tea has shown to lessen the risk of dying from a variety of cardiovascular diseases. Additionally, the antioxidant properties found in green tea are shown to be cardio-protective.

Polyphenols have been suggested to reduce tumor growth and protect against harmful UVB radiation, a significant risk factor for skin cancer. Though not a primary preventative or treatment option, studies have shown positive impacts on cancers including bladder, breast, esophageal, lung, skin, and stomach cancers. Statistics have also related countries who consume large amounts of green tea tend to display lower cancer rates.

Alzheimer’s disease can be an emotional stressor on all those involved. While research regarding preventative measures is ongoing, consuming green tea may enhance the brain’s cognitive functions, including working memory. Additional results found the catechin content may protect against toxic compounds on the brain.

According to the journal Arthritis and Rheumatology, green tea may be a valuable treatment regimen for rheumatoid arthritis. Also known as RA, rheumatoid arthritis is an autoimmune disorder in which the body starts to attack its own joints, thus triggering inflammation and create painful symptoms. The composition of green tea may provide anti-inflammatory effects and reduce inflammation in the joints.

Further running along with its anti-inflammatory properties, green tea may also reduce inflammation related to skin disorders such as psoriasis. Like RA, psoriasis is an autoimmune disease. But instead of always affecting within joints, it mostly aggravates the skin surrounding them. Psoriasis creates a reddish, scaly rash and is non-contagious between individuals.

Along with brushing and flossing daily, drinking green tea may hinder harmful bacterial growth in the mouth. A healthy mouth free of bacteria lessens the risk of gum disease and tooth decay.

A warm cup of tea leading up to bed time can provoke a good night’s sleep. Just make sure it provides little to no caffeine!

Algae Oil vs. Fish Oil: Which is Healthier

What to Do if You Binged on Thanksgiving