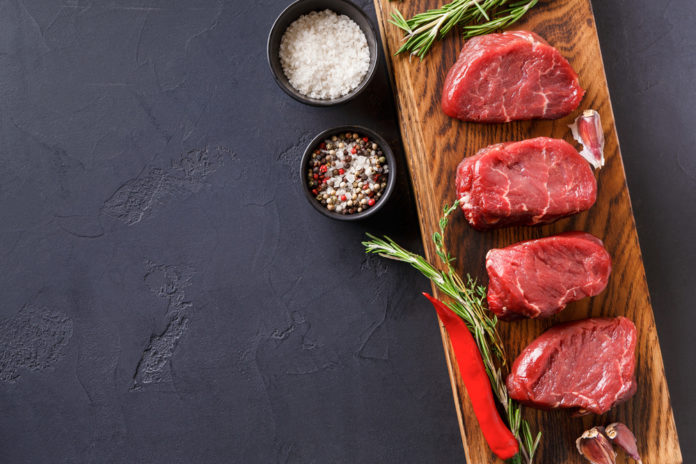 A Mediterranean-style eating pattern is often described as being low in red meat… Well, until just recently.

A Mediterranean diet is described as being rich in whole, plant-based foods while emphasizing healthy fats. A further break down includes a high intake of whole grains and legumes, fresh produce and herbs, seeds and nuts, and olive and canola oils on a daily basis. The diet also supports fish and poultry at least twice a week, dairy products and red wine in moderation, and a low consumption of red meats.

However, new research published in the American Journal of Clinical Nutrition challenged whether or not red meat should be limited.

Researchers assessed the effects of consuming different amounts of lean, unprocessed red meat in a Mediterranean Pattern on cardiovascular disease risk factors. The study included 41 adults who are overweight and at risk for developing heart disease. The participants were exposed to three different phases:

Phase 1: Over a five-week span, participants consumed a Mediterranean-style eating pattern containing approximately 18 ounces of lean, unprocessed red meat per week, which is an amount typical of the average U.S. intake.

Whereas triglycerides, total cholesterol:HDL ratio, glucose, and insulin did not change, all blood pressure parameters improved independent of the red meat intake amount.

The results prompted the the researchers to conclude, “Adults who are overweight or moderately obese may improve multiple cardiometabolic disease risk factors by adopting a Mediterranean-style eating pattern with or without reductions in red meat intake when red meats are lean and unprocessed.”

So, Should You Be Rethinking Lean Red Meat for Heart Health?

There is no denying the research is quite compelling and encouraging, especially with the improvements baring results in a mere five weeks.

But the data is not a red light to stop eating chicken and fish, nor is it a green light to grill up that 8-ounce steak nightly. Dr. Wayne Campbell, a professor of nutrition science at Purdue University, further warns, “This study was not designed to promote red meat intake, and we are not encouraging people who otherwise consume a vegetarian-style eating pattern to begin consuming red meat.”

Remember: The study did not promote endless amounts of meat, but 18-ounces of lean, unprocessed meats.

That being said, red meats are animal muscle meats that include beef, veal, pork, lamb, mutton, horse, and goat. Processed meats are considered to be products that are transformed through processes such us salting, curing, and fermentation for enhanced flavor and increased preservation. Processed meats can include red meats but also turkey bacon, ground chicken, and other poultry products.

Understanding the difference is key for overall health, as the consumption of processed meat bares sufficient, convincing evidence that it is carcinogenic (cancer-forming) to humans.

And with 34,000 cancer deaths per year associated to high processed meat diets, the World Health Organization (WHO) International Agency for Research on Cancer encourages consumers to limit processed meats to once or twice per month.

A nutrient-dense, whole foods eating pattern takes precedence over diets rich in highly processed and packaged foods. Incorporate more whole grains, fresh fruits and veggies, lean and plant-based proteins, and healthy fat sources and limit the consumption of packaged and boxed products that tend to be loaded with sugar, salt, and saturated and trans fats.

Foods to Eat & Which to Avoid to Fight Breast Cancer

Should You Take Immune-Boosting Supplements When You’re Sick?

How to Deflate Belly Bloat