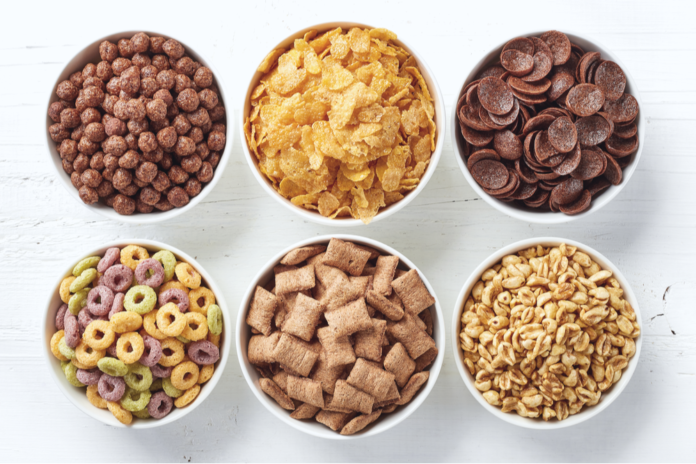 Delicious and often fortified and filled with sweet sugar, cereal is a staple around the world. Typically imagined as the colorful loops and cocoa puffs in decorative cardboard boxes, these only constitute the most modern versions of cereal.

So how does cereal fare for breakfast and what are the different types of cereal? Is cereal healthy or is cereal bad for you, and if the former, what are the best cereals?

This article exposes the most important truths about this fan-favorite first meal of the day.

Cereal is defined as any grain cultivated for food consisting of various components like the endosperm, germ, and bran. Cereal grains are the most grown and eaten food worldwide, even more than any other type of crop.

There are various ways to essentially categorize cereal but the two most popular include grain type and temperature. Wheat, maize, rice, barley, oats, rye, sorghum, and corn comprise the eight most prevalent sources of cereals. They can be consumed as cold or dry cereal depending on manufacturing.

Most cereal grains boast similar nutrition profiles, rich in starchy carbohydrates with a touch of protein. Also after manufacturing, they frequently contain more than one type of grain.

Perhaps the most well-known cereal grain, it is also one of the oldest domesticated. It can be cultivated in various soils, thrives in temperate climates, and is produced for animal meal, flour and bakery products, and of course, breakfast cereals. In its whole, natural form it provides fiber, a filling nutrient with prebiotic properties.

Otherwise known as corn, maize was first domesticated by Native Americans and then introduced to Europe thereafter. Corn can be sold in a fresh, canned, or frozen form and is processed into various foods like cornflour, oil, syrup, and other byproducts. Corn flakes, corn-based Chex, and Cheerios include corn-based ingredients.

The second-largest crop cereal behind wheat, it is normally grown on paddies and harvested by hand, unlike wheat that is generally raised on large farms and harvested mechanically. Most rice is milled for local consumption and is most popular in Asain cultures. Naturally gluten (the protein found in wheat) free, some rice-based cereals include Fruity Pebbles, Rice Chex, and Puffins.

Although normally cultivated for animal feed, it is also the main source of malt for the brewing and distillation of various alcoholic beverages and an ingredient in vinegar along with serving as a breakfast cereal. When eaten in its unprocessed form, it has a chewy texture and mildly nutty flavor.

Among the healthier grains on earth, oats are a naturally gluten-free, whole grain that offers vitamins, minerals, fiber, and antioxidants and are associated with health benefits. Most people consume oats as the hot cereal known as oatmeal. Half a cup of dry oats contains 191 percent of the RDI for manganese, 41 percent for phosphorus, and 10 to 39 percent of B-vitamins.

Interestingly, rye can be grown in relatively poor soil and can survive severe winters better than any other grain. Typically, rye is used to produce rye bread but is also used in other bakery products, whiskey, and very occasionally cereals. When used for cereal, it is served hot.

In their natural form, nearly all of the above grains are eaten as a hot food. Traditionally, they are cooked in boiling water or milk to soften their texture from hard and gritty to soft and chewy. This also breaks down some of the starch, making them easier for the body to digest.

Cold cereals, on the other hand, are less of an opposition than a secondary form of their hot counterpart. Cold cereal really refers to eating it with cold milk. This kind of cereal has a crunchy texture that is softened when a cold beverage is added but remains fairly intact when added to another food such as yogurt.

Furthermore, cold cereals often include multiple kinds of grains, additives, and preservatives and tend to be highly processed and manufactured.

In their natural, unprocessed, and unrefined form whole grain cereals are plentiful in nutrients like fiber and vitamins and minerals. They make affordable, convenient, quick, and satiating side dishes or meals. This designates them a favorite breakfast, mid-day snack, and evening delight.

Healthy is an arbitrary term, but in cereal’s case, it can be defined as nutrient-dense, minimally processed, and full of fiber. It is also not too high in added fats, sugar, or calories from other ingredients.

Using these standards, the healthiest cereals include:

In fact, one serving size of most shelved cereals contains over half the recommended daily sugar intake. This is 25 grams for females and 38 grams for males.

The following unhealthy cereals are not only high in added sugars but comparatively low in protein and other vitamins and minerals.

Cereal may not constitute the worst breakfast option, especially ones from the healthy list. However, plenty of other wholesome, hearty options exist as well.

Generally speaking, the healthiest breakfasts are high in fiber and protein and moderate in carbs and/or fat. The balance of nutrients helps sustain energy and prime the brain to make nutritious choices after breakfast as well.

Healthified Muffins: Swapping white flour for wheat or oat or almond; replacing refined sugar with honey, maple syrup or coconut sugar and; using coconut oil, ghee, or applesauce in place of butter or vegetable oils easily healthify this tasty breakfast that is typically high in sugar and fat.

Greek Yogurt Bowls: Use unsweetened, non-fat Greek yogurt as a base and top with satiating extras like chia seeds, flaxseed, or sliced almonds. Add natural sweetness from honey, berries, or other fruit balance this into a tasty, wholesome meal.

Protein Pancakes: Many ways exist to morph these typically high sugar cakes into fiber-filled and protein-packed deliciousness. The two most common include using protein powder as the “flour” base or mixing egg whites with bananas. Top them with pure almond or peanut butter for some added healthy fats and skip Mrs. Butterworth to reduce a sugar crash later in the day.

Veggie Omelette: Load up a 2-3 egg omelet with veggies such as spinach, mushroom, peppers, and onions. Add a sprinkle of cheese to create a high protein, satiating breakfast that can help you get 1-2 servings of veggies right from the start!

Lox and Avocado Bagel: Also known as smoked salmon, topping a whole wheat bagel with some avocado and lox is an exceptionally satisfying and satiating meal guaranteed to keep you full for hours.

Elliott B. The 15 Healthiest Cereals You Can Eat. Healthline. Published July 3, 2017. www.healthline.com/nutrition/15-healthiest-cereals.

Groves M. Is Barley Good for You? Nutrition, Benefits and How to Cook It. Healthline. Published August 9, 2018. www.healthline.com/nutrition/barley.

Janick P. The 10 Worst Cereals You Can Buy, According to Their Nutritional Value. Spoon University. Published April 4th, 2018. spoonuniversity.com/lifestyle/10-worst-cereals-according-to-nutritional-value.

Rye – The Most Fibre Rich of All Our Nordic Cereals, and Gives You a Feeling of Satisfied Fullness. Lantmännen. Published November 15, 2017. www.lantmannen.com/good-food/four-kinds-of-cereal/rye/.

Tree A. What Are the Different Types of Cereal? DelightedCooking. www.delightedcooking.com/what-are-the-different-types-of-cereal.htm.

The History of New Year’s Resolutions

Weight Lifting for Beginners in 7 Steps