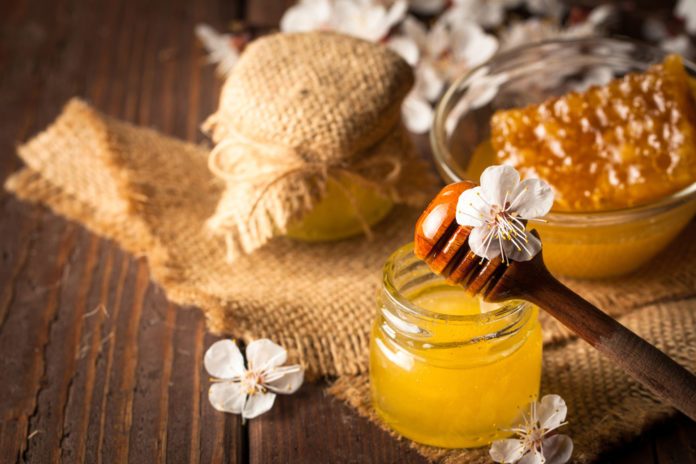 According to documentation records, honey was the first natural sweetener put into use. From a million years ago to the present, it continues to sweeten and benefit the body.

What Is White Honey?

Despite its name, white honey actually is not purely white. The honey is, however, much lighter than traditional honeys and oftentimes a very light amber color, but also dependent on the source of the honey. Common producers of white honey are flowers from the kiawe tree, native to Hawaii, and depicts the distinctive white honey – smooth and creamy. The desirable characteristics of white honey occur by its natural crystallization process. Since the traditional honey is produced mainly in Hawaii, obtaining the product may be hard to come across in most common grocers. To supply white honey seekers, honey pollenated by various flowers (including sage, alfalfa, and fireweed) are artificially crystallized, with the variable sources responsible for disparities of white honey products. For instance, lighter honeys offer a lighter taste and sweetness compared to darker honeys. But despite the source, all white honeys provide a spreadable, off-white sweetener while offering health benefits when consumed, especially with its raw form.

Unlike most sugar, particularly common table sugar, white honey provides more than calories. And though it is comparable to sugar calorically, it offers valuable vitamins and minerals including B vitamins, vitamin A, calcium, copper, phosphorous, potassium, and zinc. Additionally, powerful antioxidants are rich in honey. The nutritional totality of honey can ultimately provide the following benefits:

The high antioxidant content of honey is shown to protect the body against multiple diseases including heart disease. The offered antioxidants may also protect against cancer by reducing damage to the body’s cells.

Raw honey can be quite beneficial to gut health and often used to treat digestive issues. Though the research is lacking, individuals use raw honey to treat diarrhea. But research supports honey as an effective treatment for Helicobacter pylori, a cause of peptic ulcers occurring in gastrointestinal tract.

Especially when dealing with a sore throat, honey can act as a natural remedy to relieve the pain. Raw honey can also act as a cough suppressant, even comparing to over-the-counter cough medicine.

During physical performance, especially endurance exercise, carbohydrate is the body’s primary energy source. Not only does honey contain 17 grams of carbohydrate per tablespoon, but offers slow-burning fructose. The slower release of fructose (compared to glucose) may sustain athletes throughout longer periods of physical activity.

Though not directly a health benefit, white honey is suggested to be ideal for baking. Compared to other honeys, white honey best retains moisture for longer periods of time. The lighter taste also makes white honey an excellent sugar alternative, especially to reduce sweetness in products.

Mostly related to its microbial content, raw honey does hold some risk and should be warned with caution. The risks are primarily pointed to botulism, harmful bacteria, that may cause illness and symptoms that resemble food poisoning. Children under the age of one should not be introduced to all raw forms of honey while individuals who are immunocompromised should also use raw honey with caution.

Reference: Ajibola A, Chamunorwa JP, Erlwanger KH. Nutraceutical values of natural honey and its contribution to human health and wealth. Nutrition and Metabolism. 2012.

The Great Benefits of Black Pepper Essential Oil and Uses

The One Simple Tip That Will Make You a Morning Person