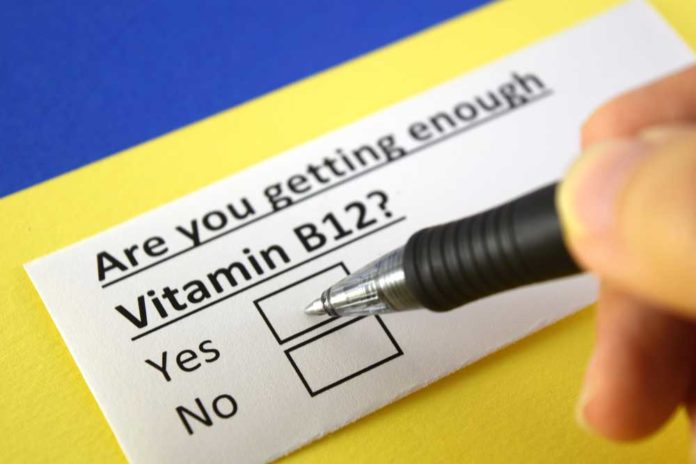 The RDA for both male and female adults is 2.4 micrograms (µg) per day, although intakes of 4 to 7 have also been recommended. Pregnant and lactating women are encouraged to increase intake by 0.2 and 0.4 µg per day, respectively. People aged 51 years or older are encouraged to consume vitamin B12 fortified foods or with supplementation.

Vitamin B12 is primarily found in animal sources, though plants can become sources following contamination, with the presence of bacteria in the plant root or fortification under food processing. The best sources of vitamin B12 include:

Aside from food sources, vitamin B12 is also available in supplement and injection forms. Supplementing is valuable for individuals with absorption issues, as the synthetic form is more readily absorbed compared to natural food sources. The injection is also valuable for individuals with compromised B12 absorption, as the vitamin bypasses the digestive system and is directed straight to the blood.

A vitamin B12 deficiency may disturb hematological and neurologic systems and initiate the following signs and symptoms:

Hematology is the study of blood in health and disease, encompassing problems with red and white blood cells, platelets, blood vessels, lymph nodes, spleen, and protein involved in bleeding and clotting.

Specifically known as pernicious anemia, this specific type is triggered by a B12 deficiency when the stomach does not make enough intrinsic factor (IF). IF helps facilitate vitamin B12 absorption and its absence may be related to an autoimmune disorder, a compromised stomach lining, or a hereditary disorder.

Pallor is a pale color of the skin and primarily caused by reduced blood flow or a decreased number of red blood cells.

Palpitations may be feelings of the heart beating too quickly or fast, skipping a beat, or fluttering. Such feelings can be noticed in the chest, neck, or throat.

Any neurological disorder is characterized by impedances on the nervous system, including the brain, spinal cord, and nerves.

Caused by nerve damage, people may describe the feeling of pins and needles in hands or feet or complete numbness.

Individuals may become uncoordinated and experience an abnormal gait, or the person’s manner of walking.

People may be irritable and become frustrated, agitated, or upset more easily.

Compromised nerve function can lead to confusion or even dementia. Individuals may even feel disoriented.

Deficiency may lead to psychosis, or a serious mental disorder characterized by thinking and emotions, severe enough that individuals often lose contact with reality.

Interestingly, vitamin B12 deficiency symptoms resemble those of dementia, though the two conditions overlap 75 to 90 percent of the time.

Being known as the “energy vitamin,” individuals may show the earliest signs of fatigue, weakness, and confusion. But considering the vagueness of such feelings and the multitude of triggers that may have lead to them, a vitamin B12 deficiency may go unnoticed. If symptoms are prolonged for weeks at a time, professional guidance should be sought out to avoid further health complications and severity. A blood test is the only way to confirm a B12 deficiency, and a blood level below 200 pg/mL (picrograms/milliliter) is considered diagnostic. And considering vitamin B12 is primarily found in animal products, vegetarians and vegans are at greater risk of developing a vitamin B12 deficiency.

Deficiency is also noticed in seniors aged 50 or older, who oftentimes have poorer appetites and lose their ability to absorb vitamin B12. Other conditions that may compromise effective vitamin B12 utilization include impairments in pancreatic, stomach, intestinal functions, including Celiac and inflammatory bowel disease, or those who have had a weight loss or bariatric surgery.

Additionally, heartburn medications and oral contraceptives have also shown to increase vitamin B12 deficiency risk. But deficiency is not only confined to adults, but can be extremely serious in infants. Low B12 levels in infants are commonly noticed in babies who are strictly fed an animal-free diet or if a breastfeeding mom follows a vegan lifestyle without supplementation. Prenatal vitamins fortified with B12 can help prevent deficiency and its associated symptoms, including anemia, compromised development, and potentially death primarily related to failure to thrive.