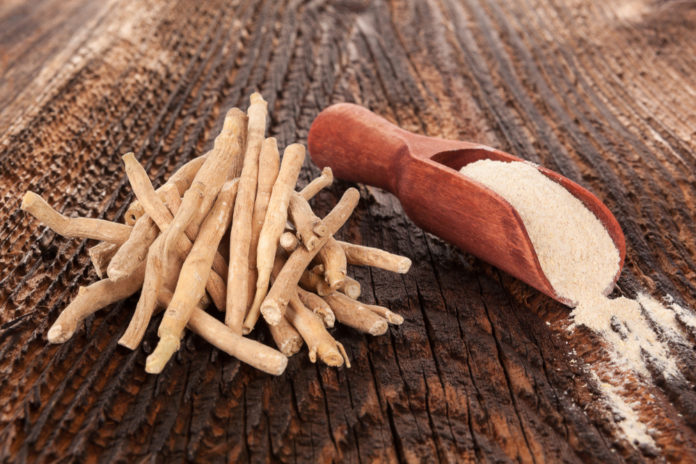 Asha-whatta? Pronounced ash-wa-gon-duh, ashwagandha has been used in alternative for centuries, baring benefits for men, weight loss, and much more.

And not to mention, ashwagandha also means “smell of a horse,” exposes a strong aroma, described as “horse-like,” and has been said its users gain the strength and stamina of a horse!

According to Merriam-Webster, ashwagandha is “a preparation usually of the leaves or roots of an evergreen shrub (Withania somnifera) native to Africa, Asia, and southern Europe that is used in herbal medicine especially as a tonic, anti-inflammatory, and adaptogen.”

“What’s an adaptogen?” you may ask…

Adaptogens are non-toxic plants often marketed to defend against stressors of all kinds. They work by increasing the body’s ability to resist the damaging effects of stress and promote or restore normal physiological functioning with Ayurvedic medicine using them to diminish and alleviate mental and physical stress.

Specific to ashwagandha, the adaptogen is is predominately used to manage a number of health conditions, including depression, anxiety, arthritis, infertility, and diabetes, along with hopes to fight against aging by improving brain function and boosting memory.

Being a well-documented adaptogen, ashwagandha has a long history of reducing stress and anxiety. What’s more, after assessing existing five reported human trials of ashwagandha for the treatment of anxiety, the Journal of Alternative and Complementary Medicine concluded intervention groups using the plant resulted in greater score improvements (significantly in most cases!) than placebo in outcomes on anxiety or stress scales.

When it comes to a specific ashwagandha dosage for anxiety, taking a specific root extract 300 milligrams twice daily after food for 60 days appears to improve symptoms of stress according to WebMD.

Particularly by reducing and resisting against stress, a 2012 study suggests that a high-concentration of ashwagandha root extract safely and effectively improves self-assessed quality of life.

HDL works to take up the LDL cholesterol from the bloodstream, transport it to the liver, and ultimately excrete it from the body. Improving cholesterol levels is essential for lowering the risk of heart disease.

Ashwagandha has shown to improve physical performance in both generally healthy individuals and athletes. A 2010 study observed the effects of ashwagandha on 40 healthy young adults, eventually concluding the adaptogen increased velocity, power and VO2 max, which is the measurement of the maximum amount of oxygen a person can utilize during intense exercise.

In a study published in the Journal of Ayurveda and Integrative Medicine, researchers sought out to discover the effect of Ashwagandha on the cardiorespiratory endurance of 40 elite cyclists. All cyclists completed a treadmill test to determine baseline levels then then were divided into two groups, one of which received 500 mg capsules ashwagandha twice daily while the other took starch capsules for eight weeks.

The cyclists then completed a final treadmill test, with those who received the ashwagandha demonstrating increased cardiorespiratory endurance (aerobic) capacity.

While improving physical performance can naturally support a healthy physique, research published in the Journal of Ayurveda and Integrative Medicine supports ashwagandha benefits for weight loss.

In fact, supplementing with ashwagandha at 750 to 1,250 milligrams (mg) daily for a month increased lean body mass and decreased fat in generally healthy individuals.

Arthritis describes inflammation of one or more joints and causes pain, swelling, stiffness, and decreased range of motion that can worsen with age. Symptoms can vary from mild to severe, thus increasing the risk of inability to accomplish day-to-day functions and a lower quality of life.

A 2015 study evaluated the efficacy and safety of Ayurvedic treatment, including the use of ashwagandha powder, in patients with rheumatoid arthritis. Following treatment, patients experienced lesser counts of tender and swollen joints and overall pain.

7. Assists in the Fight Against Cancer

According to the Memorial Sloan Kettering Cancer Center, lab studies have found ashwagandha kills some cancer cells and enhances some immune cells possibly by damaging the cancer cells’ ability to generate the energy it needs to reproduce.

Ashwagandha also reduces the level of an important antioxidant in tumor cells, which may enhance the ability of radiation therapy to kill those cells.

Ashwagandha has long been used in the traditional Ayurvedic system of medicine to enhance memory and improve cognition.

The Journal of Dietary Supplements approves ashwagandha may be effective in enhancing memory in people with mild cognitive impairment (MCI), along with improving decision-making function, attention, and information processing speed.

The thyroid is a small butterfly-shaped gland found at the base of the neck, just below your Adam’s apple. The gland makes thyroid hormone responsible for controlling metabolism in a number of ways, including how quickly the body burns calories or the heart beats.

Using ashwagandha has shown to provide thyroid-enhancing properties according to the Journal of Ayurveda and Integrative Medicine, posing a clinical opportunity for the treatment of hypothyroidism.

Regarding specific ashwagandha benefits for men, the herb might help improve fertility. Some preliminary clinical evidence suggests that ashwagandha might improve sperm quality, but not sperm count, in infertile men.

There is also slight evidence ashwagandha may increase testosterone in infertile men.

How to Take Ashwagandha

Being a plant, ashwagandha and other adaptogens are mostly considered to be safe. However, WebMD indicates ashwagandha can interact and interfere with a number of medications, including immunosuppressants, sedatives, and thyroid hormone.

Whereas appropriate dosing depends on several factors, including age and other health conditions, there is also not sufficient scientific backing to determine an appropriate range of doses for ashwagandha at this time.

Ultimately, consult a pharmacist, physician, or other healthcare professional before taking any sort of herb or supplement. You should always know exactly what you are consuming, as supplements are unregulated and may contain unwanted fillers, and follow relevant instructions.

11 Fun Ways to Use Aquafaba in a Vegan Diet

Is Eating While Standing Up Bad for You

10 Ways to Stay Healthy at a Party