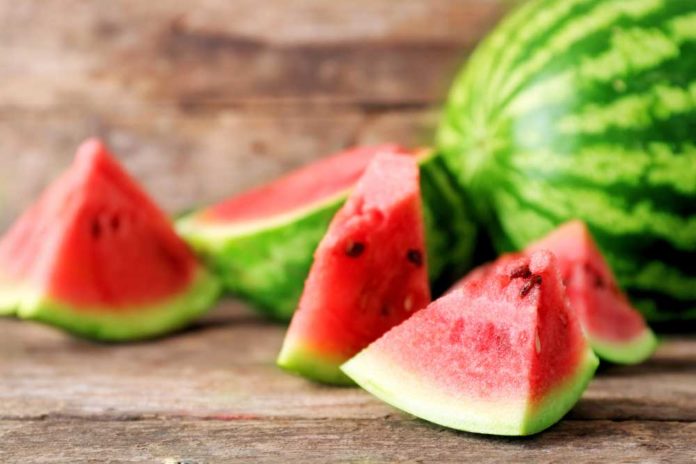 The luscious watermelon is primarily sought out during warm, summer months, as its juicy flesh promotes hydrating and cooling effects. But the well-known summer fruit deserves attention even on cool days, as its wonderful benefits are not only encouraging, but mostly well-documented and evident!

The Scoop On Watermelon

Originating in West Africa, this vine-like, flowering plant is now known to be the most consumed melon in the United States. Though several states harvest the fruit, Florida, Texas, California, Georgia, and Arizona are some of the largest growers. And as the name suggests, it contains mostly water. But do not like the name fool you too much, as it also contains natural sugar and valuable nutrients.

It is not too surprising that watermelon is comprised of 91 percent of water! But in addition to the high water content, watermelon offers 45 calories, 1 gram of protein, less than 1 gram of fat, and 12 grams of carbohydrate per a 1 cup, diced serving. Notable watermelon nutrients include lycopene, citrulline, vitamins C and A, pantothenic acid, copper, potassium, and biotin, largely associated to the benefits of watermelon.

With being comprised of 91 percent water, this luscious fruit is a valuable hydration source. Especially on a warm day, snacking on watermelon slices or this 3-ingredient watermelon slush can be a nutritious, flavorful way to lessen dehydration risk.

Studies have suggested watermelon can support heart health by lowering blood pressure, largely attributed to its citrulline content. Citrulline is an amino acid that further converts into another amino acid, arginine, in the body. In turn, arginine assists in the production of nitric oxide, a respected vasodilator. When the blood vessels are dilated, blood pressure is subsequently reduced. Controlled blood pressure levels largely lessens the likelihood of heart attack, congestive heart failure, and stroke. Additionally, its lycopene content has been implied to significantly reduce stroke risk on its own.

Foods low in calorie but rich in nutrients are suggested to aid in weight loss. Additionally, staying hydrated is another key factor, as indicated in these four ways to drink your way to weight loss.

Connected to its anti-inflammatory properties, watermelon has been suggested by the Arthritis Foundation as one of the best fruits for arthritis. It also contains beta-cryptoxanthin, a carotenoid recommended to reduce the risk of rheumatoid arthritis (RA).

A diet rich in nutrients from fruits and vegetables is suggested to improve overall health and reduce the risk of cancer. Watermelon’s lycopene content, though, raises the attention to protect against specific cancer types, as it has been explored to protect against both ovarian and colon cancer risk.

In addition to the positive link between shiny hair, clear skin, and hydration, its vitamin C content should not go unnoticed. Vitamin C is one of the most effective nutrients in promoting skin health and strengthening hair, as it assists in collagen formation. Collagen is a protein widely found in skin, hair, and nails and offers integrity and structure.

Associated to its choline content, the Framingham Heart Study Offspring cohort study suggested dietary intake has positive effects on both verbal and visual memories. Although the research is limited at this time, choline may be a beneficial aspect in slowing down cognitive decline, witnessed in both Alzheimer’s disease and Parkinson’s disease.

How Yoga Changes Your Brain (in a Good Way!)

Napping for Good Health and Wellness